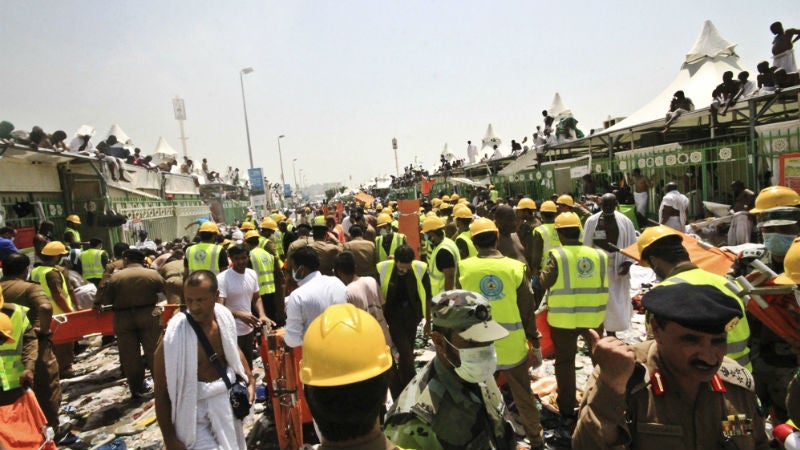 Muslim pilgrims and rescuers gather around people who were crushed by overcrowding in Mina, Saudi Arabia during the annual hajj pilgrimage on Thursday, Sept. 24, 2015. Hundreds were killed and injured, Saudi authorities said. The crush happened in Mina, a large valley about five kilometers (three miles) from the holy city of Mecca that has been the site of hajj stampedes in years past. (AP Photo)

The Department of Foreign Affairs (DFA) is still verifying reports that a Filipino pilgrim died in the stampede at the annual Hajj pilgrimage in Mina, Saudi Arabia, which has reportedly killed 700

“Our Consulate General in Jeddah is verifying reports that one local Filipino pilgrim died in the stampede in Mecca,” Foreign Affairs assistant secretary Charles Jose, spokesperson for the DFA, said in a text message.

Jose noted that the reported death was still unverified as of Friday morning.

“We extend our condolences to the families of those who died in the stampede,” the DFA said.

Saudi Arabia authorities said more than 700 people were killed in the stampede which broke out in the tent city of Mina, a neighborhood of Islam’s holiest City of Mecca on Thursday.

Millions of Muslim pilgrims troop to Saudi Arabia during September for the yearly hajj pilgrimage.