The French Embassy in Manila on Thursday launched “COP21: The Road to Paris Starts in Manila,” a week-long event coinciding with Climate Week.

From Oct. 5 to 11, the French Embassy will host film showings, exhibits and cultural events to promote efforts to address climate change.

Laurent Legodec, deputy head of mission of the French Embassy, said they decided to organize The Road to Paris to help raise awareness on climate change and the 21st Conference of Parties (COP21) to be held in Paris in December.

COP21 will gather heads of states and their representatives in France in an attempt to come up with a legally binding agreement reducing greenhouse gas emissions in order to limit the global temperature rise to 2 degrees Celsius above pre-industrial levels.

“Through our series of conferences, we hope to provide a venue for people to come together and exchange ideas on climate justice, culture and heritage, the role of the media, and how to make our communities more climate-resilient,” Legodec said.

Below is the schedule of activities for Climate Week. 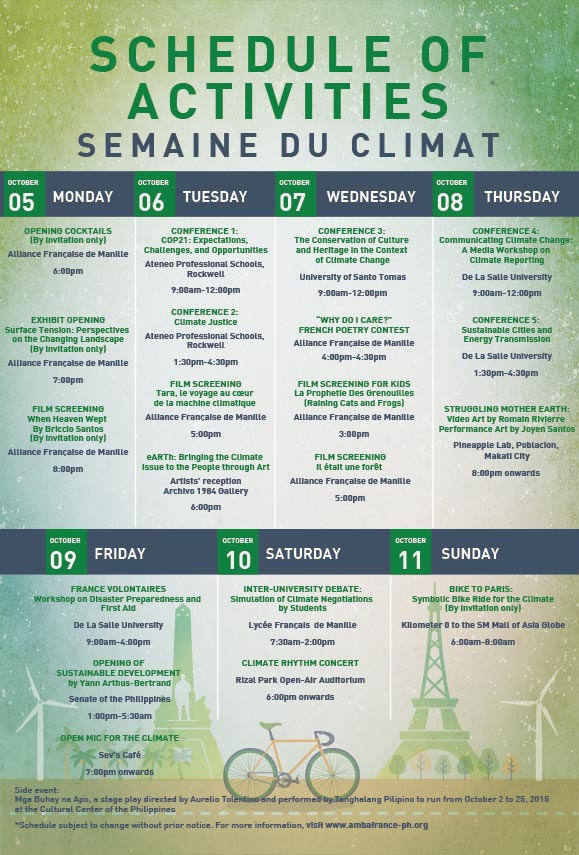 Most of the events are open to the public but some might require registration.

Besides a series of conferences to be held in various universities in Metro Manila, there will also be film screenings at the Alliance Francaise de Manilla, a French cultural institution. There will be photo and art exhibits and a “Climate Rhythm Concert” that will be held at the Rizal Park on October 10.

The final event is a “symbolic bike ride” from Kilometer Zero to SM Mall of Asia.

To promote the event, the French Embassy and its partners tapped local celebrities advocating the fight against climate change.

Present at the event were television host Kim Atienza, singer Noel Cabangon, and actor Dingdong Dantes who is also commissioner-at-large of the National Youth Commission (NYC).

Atienza said his work as a weather anchor has allowed him to observe how the climate has been changing throughout the years.

“I can see climate change very clearly in the 10 years that I was working as weatherman of TV Patrol for ABS-CBN,” he said during the event launch held at Luneta Hotel.

Atienza explained that when he started out as a weatherman, the Philippines rarely experienced really strong typhoons. He said it was only after Supertyphoon “Yolanda” (international name Haiyan) that the country was devastated by supertyphoons or those with speeds more than 220 kilometers per hour.

Dantes, on the other hand, spoke of the social media campaign #NowPH.

“We want an agreement to take place now. We want our future to be secure now.And we want the next generation to be threat-free now because we know that climate change is inevitable. Hindi natin s’ya mapipigilan, hindi natin say mare-reverse but we can minimize its effects (We can’t stop it; we can’t reverse it but we can minimize its effects),” he said.

He said it is an opportunity for ordinary Filipinos to engage in the discourse on climate change while government leaders participate in the COP21. 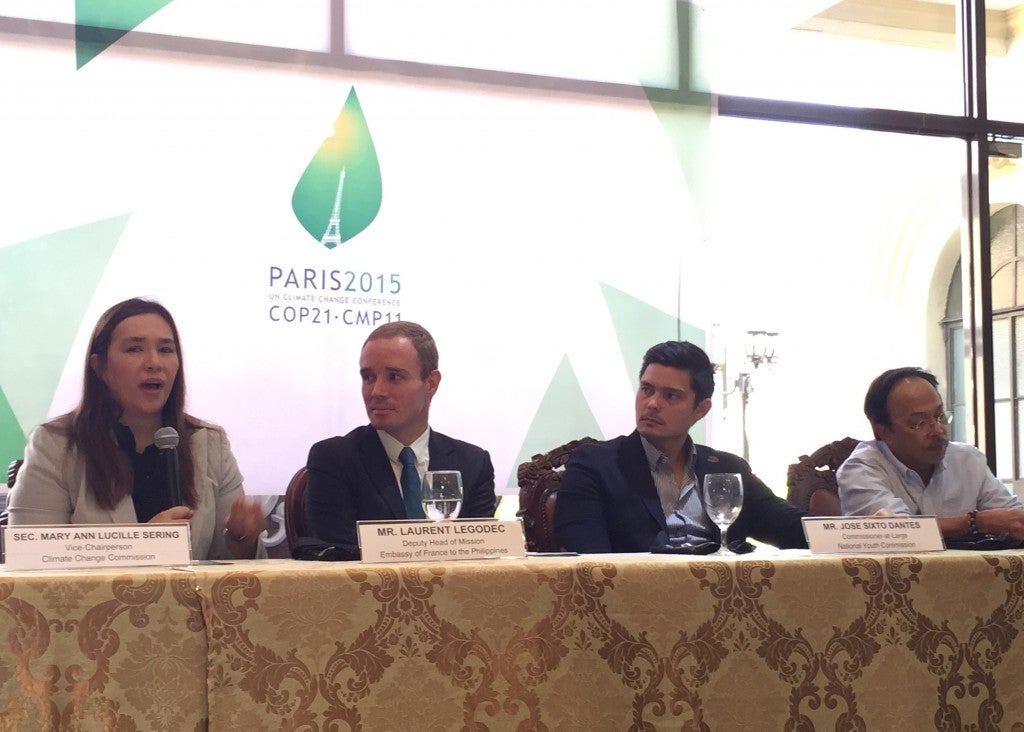 As of Thursday, the online petition of #NowPH (Not on Our Watch Philippines) has 14,905 signatories. The online petition allows netizens to choose their pledge or how they can directly reduce their carbon footprint.

Dantes said they will also be gathering support offline through signature sheets, radio promotions and workshops.

Dantes said the petition will be presented to French President Francois Hollande, who earlier this year, together with President Benigno Aquino III, launched the Manila Call to Action on Climate Change.

READ: Aquino, Hollande to call for int’l action on climate

“We have a campaign that is youth-led. This signature campaign will bring to Paris this year to present to the French people, through the leaders, that we don’t want another delay on action on climate change,” she said. IDL