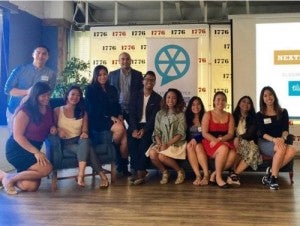 The team behind the successful NextDayBetter + Washington, D.C. PHOTO BY PBANDJAMIEZ

WASHINGTON, D.C. — Filipinos and other members of diaspora communities in Washington, D.C., came together to connect and exchange ideas on how to bring about culinary innovation and change in their respective communities.

NextDayBetter + DC, a creative speaker series for diaspora communities, which took place on September 19 at 1776 The Penthouse, drew some 150 participants who came to listen to inspiring stories and share their ideas over Filipino food prepared by some of the district’s well-known chefs.

The event brought together thought leaders and innovators from an array of disciplines including Nani Coloretti, deputy secretary of the U.S. Department of Housing and Urban Development; Erik Bruner-Yang, chef and restaurateur at Toki Underground and Maketto; Darryl Perkins, VP for community and business development of Broccoli City; Kalsoom Lakhani, founder and CEO of Invest2Innovate; Cathal Armstrong, chef and proprietor of Restaurant Eve; and Patrice Cleary, owner of Purple Patch.

In his remarks, Philippine Ambassador Jose L. Cuisia, Jr. commended the company for its efforts to reach out to the Filipino diaspora in Washington, D.C. and underscored the important role the community plays in the district’s economy.

He added that according to 2015 data of the American Immigration Council, about 1 in 7 Washingtonians is foreign born. U.S. Census figures show that D.C. was home to 92,819 immigrants in 2013.

“Immigrants are not only essential to the District’s economy as workers, but also account for billions of dollars in tax revenue and consumer purchasing power. Stories of these minority groups are not often heard, and NextDayBetter can help tap into those powerful stories,” Cuisia said. 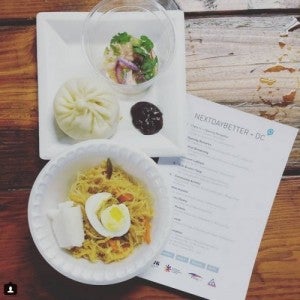 Filipino food is an emerging culinary trend in the U.S., with two new restaurants and a pop-up opening in Washington, D.C. this year. American TV personality, chef and food writer Andrew Zimmern dubbed Filipino cuisine as the “next big thing.”

“We often hear about the numerous ways America has influenced the Philippines. However, the presence of Filipino D.C. chefs this afternoon is an example of the many ways the Philippines also influences America,” said Cuisia.

The September 19 installment of the series was the pioneer event for Washington, D.C.