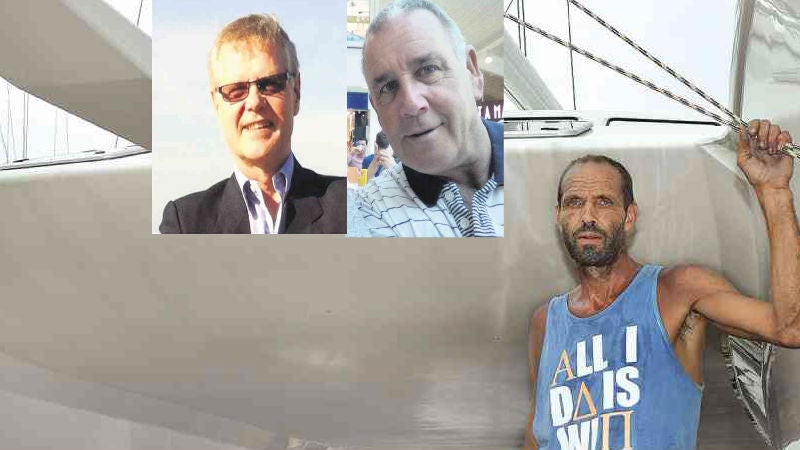 DAVAO CITY, Philippines—Policemen and soldiers in three provinces have launched a massive land and sea search for two Canadians, a Norwegian business executive and a Filipino woman who were kidnapped from the Island Garden City of Samal in a midnight attack that alarmed Malacañang.

Using a style reminiscent of past attacks by Abu Sayyaf bandits in the conflict-racked southern islands, the gunmen seized their four targets when they broke into a marina before midnight on Saturday.

Riding in two motorized outriggers, the gunmen also tried to seize a foreign couple—the woman reportedly Japanese—from one of the yachts docked at the marina but the pair escaped by jumping off their boat, police said.

President Aquino went to the island two weeks ago to inaugurate a road network project and even visited Holiday Oceanview Marina, where the four kidnap victims had apparently been staying.

Malacañang said Aquino was closely monitoring the pursuit operations launched by the Philippine National Police, the military and other law-enforcement agencies.

Communication Secretary Herminio Coloma Jr. said the PNP had yet to identify the group behind the kidnapping.

Brig. Gen. Allan Arrojado, commander of the Joint Task Group Sulu, said his group did not have any confirmation that the captors were Abu Sayyaf gunmen.

For his part, Igacos Mayor Aniano Antalan said it was possible the abductors were Abu Sayyaf men even if a group supposed to be New People’s Army (NPA) rebels claimed responsibility for the kidnapping.

The regional police director, Senior Supt. Samuel Gadingan, said the authorities found a piece of paper near the vicinity of Holiday Oceanview Marina supposedly left behind by the kidnappers.

“There was this note that said (the kidnapping) was in retaliation for the death of the suspects’ commander. But we’re still validating it,” he said.

The note, scribbled in blue pentel pen, reads, in Filipino: “Justice for our commander.”

Antalan said he did not believe the NPA was responsible.

“In their note they claimed they’re NPA but they have no means of pulling off such kidnapping. They’re also not known to use pump boats,” Antalan told the Inquirer.

He said only the Abu Sayyaf was known to use speedboats.

“The PNP’s antikidnapping group is … coordinating with the military’s Eastern Mindanao Command and other agencies in resolving this case,” Coloma said.

They were abducted from the Island Garden City of Samal (Igacos).

Gadingan, who has jurisdiction over Igacos, said search-and-rescue efforts were being carried out in Compostela Valley, Davao Oriental and Davao del Norte provinces.

The Navy and the Coast Guard were helping, he said.

Chief Supt. Wendy Rosario, the Southern Mindanao police chief, said a task force had been created to rescue the victims. He said the police were still facing a blank wall on where the victims were taken.

He said police and military units in southern Mindanao had been placed under alert.

Guerrero said they had dispatched Navy units for “maritime interdiction in the Davao areas.”

As of late Tuesday afternoon, there had been no visual sightings of the victims or their abductors.

Arrojado said his group was strengthening naval operations to disrupt any plans by the gunmen to bring their captives to Sulu.

Three Navy patrol vessels—the BRP Jose Loor Sr., the BRP Iloilo and the BRP Dioscoro—have been deployed to conduct patrols and blockade the waters off Sulu.

Capt. Alberto Caber, regional military spokesman, said about 30 foreigners were present when the gunmen arrived at the resort and took the four victims.

“Reports said the perpetrators were speaking in English and Filipino,” Caber said.

Gadingan said a Japanese woman and her husband were wounded after they tried to resist. “They were taken to a hospital for treatment and are now out of danger,” he said.

Another police report identified the Japanese woman as Kazuka Tripp and her husband as Steven.

Ridsdel is a top official of TVIRD, which operates the Canatuan mines in Zamboanga peninsula and a nickel project in Surigao del Norte province through its 60-percent stake in Agata Mining Ventures Inc.

Little is known about Hall except that he also reportedly works for a mining company.

“This is condemnable. Our island has been peaceful for many years and thousands of tourists come here every year,” Antalan said.

About 680,000 tourists visited Samal last year, including 29,477 foreigners, according to the provincial tourism office.

Created in 1998, the island city of Samal is known for its powdery sand beaches and pristine diving spots.

“We’re bracing for an adverse effect in our local tourism industry but authorities are working to resolve this incident the soonest,” Daquioag said.

This was the second high-profile attack on the island.

In 2001, the Abu Sayyaf attacked the Pearl Farm resort owned by the Floirendo family and killed two employees. But they failed to abduct any of the guests.