Fil-Am teen pleads not guilty in killing of California girl, 8 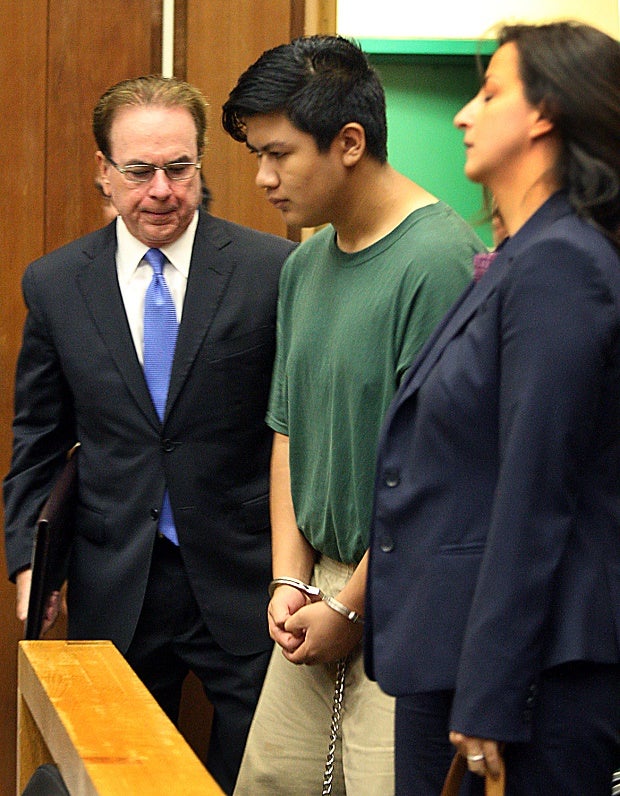 In this July 30, 2015, file photo, Adrian Jerry Gonzalez, center, is flanked by public defender Larry Biggam and attorney Leila Sayar as they enter the courtroom where his arraignment was delayed in Santa Cruz, Calif. Gonzalez pleaded not guilty Monday, Sept. 21, to the kidnapping and killing of Madyson Middleton at the tight-knit artist community where they both lived. Dan Coyro/The Santa Cruz Sentinel via AP FILE PHOTO

SANTA CRUZ, California — A 15-year-old California boy pleaded not guilty to the kidnapping and killing of an 8-year-old girl at the tight-knit artist community where they both lived.

Adrian Jerry Gonzalez, who is being charged as an adult in the death of Madyson Middleton, was in court briefly Monday to enter his plea. Police say Gonzalez lured Madyson into his family’s apartment. An autopsy shows that she died of asphyxiation and stab wounds to the neck. He’s also accused of sexually assaulting the girl.

Both of them lived at the Tannery Arts Center, a housing complex for artists and their families in the beach town of Santa Cruz. Madyson was reported missing July 26 and hundreds of volunteers turned out to search for her.

Police twice conducted a door-to-door search of the entire apartment complex, as well as a homeless shelter across the street. Helicopters scanned the forest and the coastline, and the Coast Guard surveyed the ocean 2 miles from where she was last seen.

Her body was discovered inside a recycling bin the night of July 27.

Flags were lowered to half-staff in the laid-back surfing destination and hand-written signs popped up in storefronts and on light posts in honor of the girl.

At an event for Madyson, her mother, Laura Jordan, hugged Gonzalez’s mother and said she doesn’t fault her for Madyson’s death.

Jordan said her daughter was energetic and active, and that she loved animals, especially wolves.

Public defender Larry Biggam told reporters at Gonzalez’s first court appearance that his job is to “review the evidence, conduct our own investigation and make sure that the minor, like every citizen accused, receives a fair trial.”

Gonzalez was ordered to re-appear in court on Oct. 29.

If found guilty of all counts, he faces a maximum of life in prison.