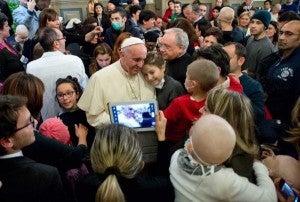 NEW YORK CITY — With his consistent, clear insistence on the primacy of the poor, especially the poor in developing countries, Francis may be not only the first Latin American pope of a two-millennium-old institution that has over a billion members, but also its first postcolonial patriarch. He has shifted the traditional focus on dealing with the centers of economic and military power to the peripheries, to those countries with little sway or say globally—countries not coincidentally that used to be colonies of the West.

Like a sensitive and polished actor, he is well aware of how, as limiting as his role can be, it is also one full of potential surprises. In Bolivia he apologized for the Vatican’s role in encouraging Spanish colonialism in South America that resulted in the decimation of indigenous peoples and cultures and the installation of a mestizo-dominant, Eurocentric power structure. What a difference from Benedict’s remark! In his 2007 visit to Brazil, the good German remarked that in colonial times native populations were “silently longing” for the faith imported from Europe—remarks that he had to distance himself from, after a justifiable uproar. And surely Francis, a/k/a Jorge Mario Bergoglio, as an Argentinean must have been aware of his own country’s treatment of those who were there long before the colonizers arrived. I wish Francis had made an apology as well when he visited Manila, on the incestuous relationship between the colonial state and the friars during the period of Spanish colonization, and the resulting massive exploitation.

Consider the countries Francis has visited, and you can see his attention to the margins: Sri Lanka, Bolivia, Ecuador and the Philippines. And on his latest foray outside the Vatican, his first stop has been Cuba, where he is as I write this, and whence he leaves for Washington, DC, Philadelphia, and New York City: a journey from the periphery to the center. He has been a catalyst in the thawing of U.S.-Cuba relations, paving the way for the possible easing of the decades-old embargo, which hasn’t done anything to weaken but has in fact strengthened the regime there. This is not something that endears him to the hardliners at the center, still burdened with a Cold War mentality that believes in the primacy of military action and even more military action.

He’s comfortable being with the poor, the disaffected, the deviant—and this will be reflected when he visits the inmates at a Philadelphia prison, and drop by a school in a far from privileged neighborhood of East Harlem. He is a man willing to listen to the powerless and the ostracized even while it is clear that church doctrine will most likely not change. I say “most likely” and not “surely” for as in the case of priestly celibacy, this is a matter of tradition, not part of the church’s core beliefs. After all, married clergy of other faiths who have converted to Catholicism are allowed to retain their ministries. And he has eased the rules regarding the annulment of marriages.

His now famous line, when dealing with a question about gays, “Who am I to judge?” echoes Jesus’ pointed admonition: Let he who is without sin be the first to cast a stone. He has judged, though, the paladins wealthy beyond belief in his critique of capitalism. Addressing income inequality, in a speech in Bolivia, Francis likened capitalism to an “idol” that “guides people’s decisions,” where “greed for money presides over the entire socioeconomic system … condemns and enslaves men and women, it destroys human fraternity, “ and “sets people against one another.”

That critique is also contained in his encyclical on the environment, “Laudato Si,” laying most of the responsibility for climate change on the doorsteps of the wealthiest nations and charging them to aid the poorer nations in dealing with the poisonous effects of unbridled development, one without a conscience. You can bet this message of social justice won’t sit well with certain members of Congress, which Francis will address, especially those of the Republican Party who, passionate in their beliefs that those down and outers have only themselves to blame, wouldn’t know compassion if it hit them on the head. In one of my fantasies, I see a whip-wielding Francis driving these Pharisees out into the streets. Not to worry: They will have made enough to lead plush lives underneath whichever rocks they choose to crawl under.