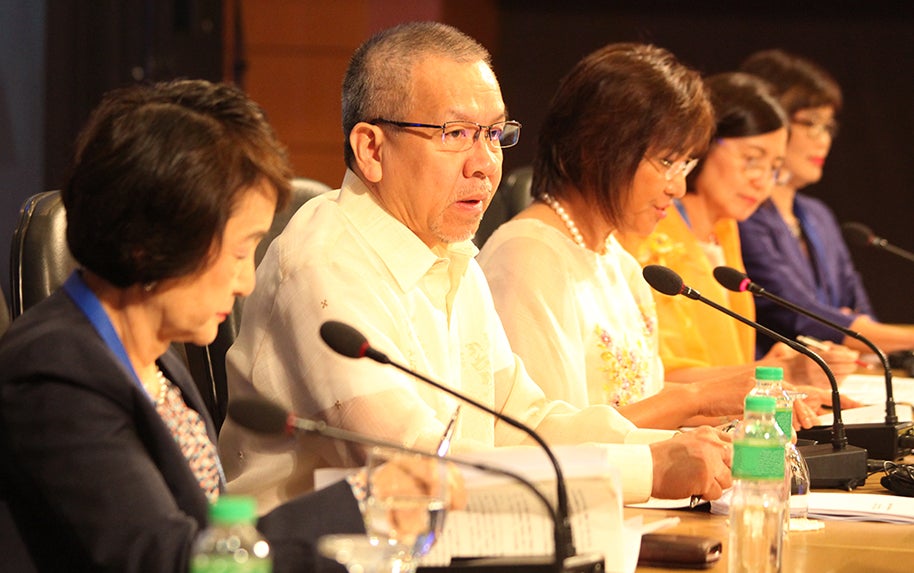 Trade and Industry Secretary Gregory Domingo on Friday stressed the importance of women’s participation in the economy, as well as the Asia Pacific Economic Cooperation’s role in eliminating barriers.

Domingo, one of the speakers at the High Level Policy Dialogue on Women and the Economy (HLPD on WE), said Apec is focusing on helping women reach their full economic potential.

“In 2010 the United Nations estimated that the Apec region stand losses up to $47 billion in output each year due to lack of women’s participation in labor markets,” he told heads of delegations attending the HLDP on WE.

“In 2012, it estimated that up to 89 billion (dollars) a year could be added to the regional economy when barriers to women’s economic participation are eliminated,” he added.

The Philippines is this year’s host of the Apec. Various events, including the ongoing Women and the Economy 2015 Fora at the Philippine International Convention Center, are being held in the country.

The secretary said an earlier Apec meeting held in Boracay already identified ways to help address issues affecting women entrepreneurs. These include using gender disaggregated data in measuring economic and social impacts of businesses and promoting “an understanding of the divergent constraints faced by male- and female-led businesses.”

“Apec ministers and leaders have agreed to work together to focus on eliminating barriers that curtail gender equality and women’s economy empowerment and facilitate their access to markets, skills and capacity building, health, leadership, innovation and technology,” he said.

Domingo emphasized that the Apec region, composed of 21 member economies, could gain up to $89 billion per year “if women across the region will realize their full economic potential.”

Irene Sim, Chief of Staff of the Apec Secretariat, said Apec leaders have long recognized the “crucial role of women in the development and prosperity of the Asia Pacific.”

She said women are “prime movers of inclusive growth.”

The heads of delegations of the 21 economies are expected to adopt a Women and the Economy statement, which aims to specify actionable, measurable and concrete policy recommendations for the Apec Economic Leaders meeting in November.

Department of Trade and Industry Undersecretary Nora Terrado said the annual gatherings of Apec delegates is an “invaluable opportunity to deliberate and reason together on the many possibilities for cooperation and collaboration in policy directions, programs and strategies to advance [the] common objectives for Women and the Economy.”

Fumiko Hayashi, the mayor of Yokohama City, said during her keynote speech that efforts to empower women in Japan have “grown at a faster pace” under the term of Prime Minister Shinzo Abe.

“We were quick to focus on the number on barrier to social advancement: availability of child care,” she said, adding that various measures such as increasing the number of child care facilities have been put in place. Kristine Angeli Sabillo, INQUIRER.net

Women entrepreneur achievers to be honored in Apec exhibit