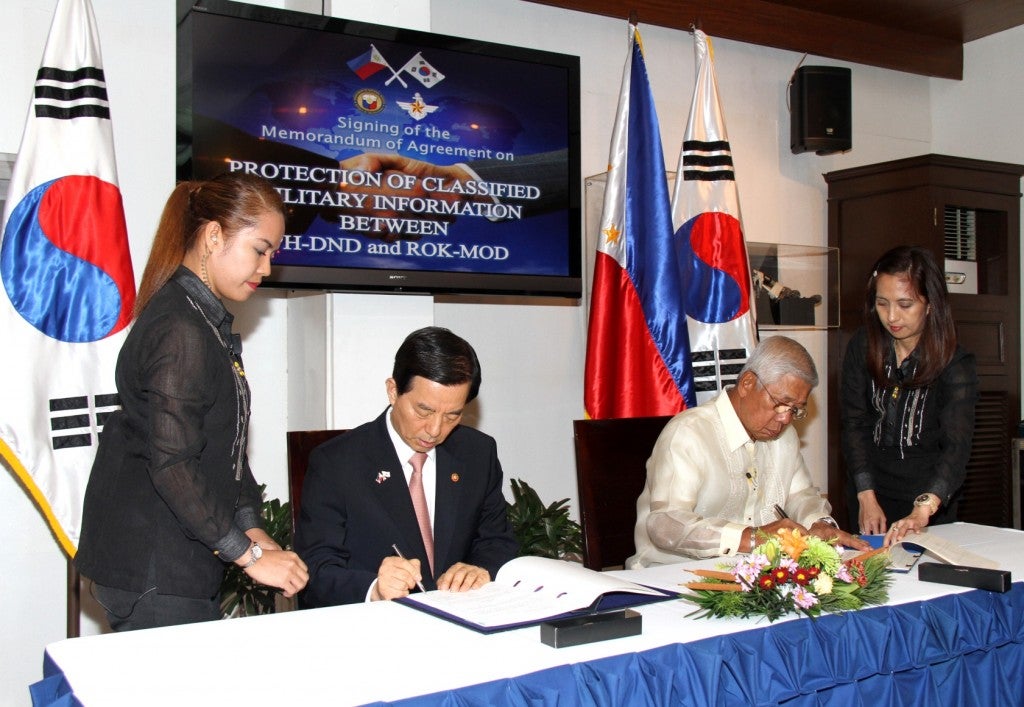 Defense Minister of the Republic of Korea Han, Minkoo and Defense Secretary Voltaire T. Gazmin signed the Memorandum of Agreement on the Protection of Classified Military Information between the Philippines’ Department of National Defense and Republic of Korea’s Ministry of Defense on September 14, 2015, at Camp Aguinaldo, Quezon City. DND-PAS

“It is my stance that the relevant nations surrounding this area and this situation should solve this situation based on mutual respect towards each other’s sovereignty and mutual cooperation and mutual understanding of each nation’s perspective,” he told reporters through interpreter in a press briefing at Camp Aguinaldo for his two-day visit in the country.

“I also believe that parties should act in accordance with the DOC that has already been made,” Han said and he looks forward to “the speedy conclusion of the code of conduct concerning the South China Sea.”

The Philippines is one of the claimants in the disputed waterway, along with Vietnam, Brunei, Malaysia, Taiwan. China has made sweeping expansion in nine areas in the Spratlys (Kalayaan Island Group) the past few months, turning reefs into artificial islands.

He described the security situation in the region as an “Asian paradox” as the economic cooperation has been deepening but not in the security operation.

“I hope that the problem of the South China Sea and its maritime routes will be resolved shortly,” he said.