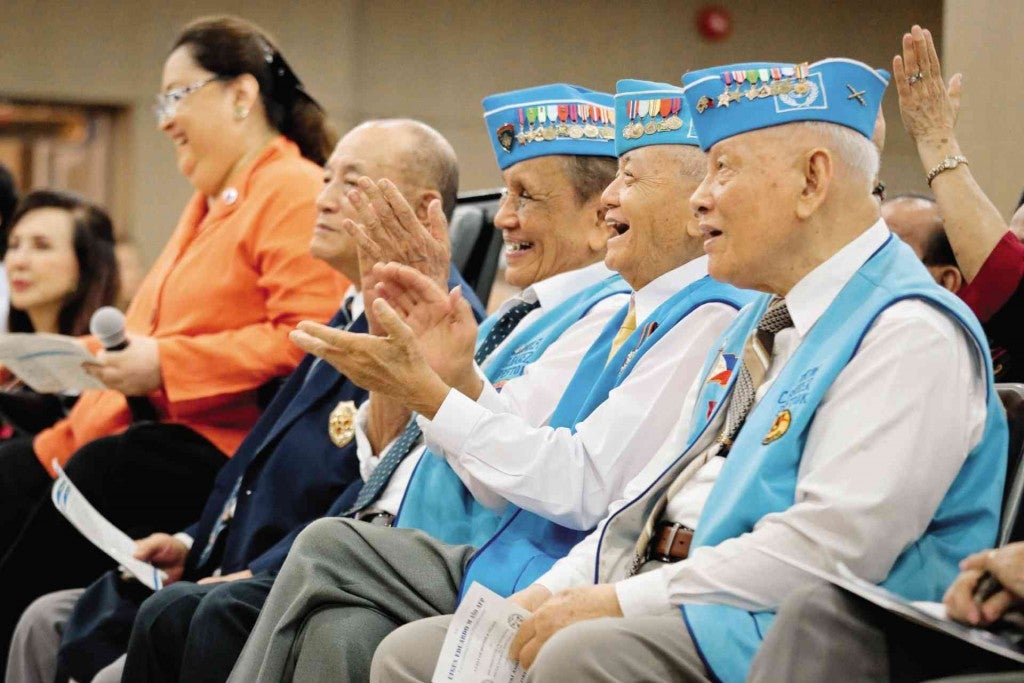 ‘WE HAVE BEEN FORGOTTEN,’ veterans of the Korean War lament during their 41st annual convention, but the Elpidio Quirino Foundation remembers to honor their heroism. With the President’s grandchildren Cory Quirino and Ruby Gonzalez-Meyer (extreme left) are veterans Arnulfo Bañez, Miguel Villamor, Crispin Paciente Sr., Augusto Flores and Ernesto Venturina. JILSON SECKLER TIU

The year is 1952. Just seven years after the end of a war that devastated their homeland, another wave of Filipino soldiers arrive in the shores of the Korean Peninsula, heeding the call to support the defense of democracy.

In unfamiliar terrain, in the bitter cold, the Filipinos—mostly just in their 20s—hang on to their helmets and rifles amid the onslaught of enemy forces.

It is the first overseas war the Philippines fought, a war largely forgotten today.

“Of course, when we arrived, we saw the people scared, hungry, with tattered clothes,” said 86-year-old retired Col. Ernesto Venturina.

“We were in the front lines. The sight of both our people and the enemy, it was sad to see that,” said Venturina, who deployed at 22, the youngest first sergeant among the entire UN forces at the time.

The memory is as vivid for retired General Prudencio Regis, Venturina’s fellow soldier in the 19th Battalion.

The unit is among forces that saw action in some of the fiercest battles in the three-year war, including the Battle of Hill Eerie, a military outpost near the 38th parallel, the demarcation that divides Korea into the communist North and democratic South to this day.

Regis arrived in the battlefield by train, going straight to the front lines.

“There were shots all over. I was praying, praying,” said the 90-year-old, who served alongside former President Fidel Ramos, among the prominent Korean War veterans whose ranks produced top military officials, diplomats and civil servants.

While memories of the war 65 years ago remain indelible in the minds of the veterans, some lament that stories of their hard-fought survival have now become cobwebbed, hardly commemorated like the true acts of heroism that they were.

“We have been forgotten. That’s the truth,” said 85-year-old Florendo Benedicto of the 20th BCT, aggrieved of what he described as the insufficient compensation benefits to Filipino Korean War veterans.

“We are very happy and honored to be here for the first time,” said Ruby Quirino Gonzalez, one of the Quirino grandchildren actively involved in the foundation.

It was the late President who sent Filipino troops to support UN forces in the Korean Peninsula in 1950, deploying some 7,500 fighters under five BCTs over three years. A total of 112 Filipinos lost their lives in the war.

The Filipino troops made up the fourth-largest contingent among 16 nations under the UN command at the time, toiling the battlefield alongside United States forces.

Among those sent to Korea’s combat zones were Qurino’s son, 1st Lt. Tomas Quirino, and son-in-law, 1st Lt. Luis “Chito” Gonzalez, husband of Victoria Quirino, the late President’s daughter. She was known as the Philippines’ teenage first lady, having assumed the role in lieu of her mother Alicia Syquia who perished in the liberation of Manila in 1945.

“It was very hard for him (Quirino) to see that he was sending more troops when we just survived the war (World War II). It was a very happy decision for him to send his own,” said Gonzalez, daughter of the late lieutenant.

“They were (Filipinos at the time) just rehabilitating their lives, and now they were going back to war. But they were all a happy troop. They were very courageous, they were known as among the bravest,” she told the Inquirer.

She said her late father, who served as a combat pilot in the war, always had stories to tell about the war.

“We were told so many stories about how it was so cold. Their suffering, it was really the weather and the danger,” said Gonzalez in an interview.

As part of a series of events leading to the celebration of Quirino’s 125th birth anniversary on Nov. 16, the Quirino Foundation launched on Sept. 7 an exhibit of just-found war photographs from the former first family’s collection at the Philippine-Korean Friendship Center in Taguig City.

Now on display at the Peftok Korean War Memorial Hall, the exhibit titled “The President’s Sons” features photographs of Tomas Quirino and Luis Gonzalez in deployment, accompanying a timeline of Peftok’s participation in the war.

Gonzalez said digging up the photographs from the war was “a thoroughly emotional journey” for the family.

The collection includes never-before-seen photos of Filipino troops in the trenches, wrapped in cold-weather gear, as if fighting winter as hard as they were the enemy forces.

Coinciding with Peftok’s annual convention, the foundation also premiered “March of the Valiant,” a gripping 30-minute retelling of the Filipino soldiers’ exploits in the Korean War, featuring the veterans themselves.

“We dedicate not only the collection, but spent a little bit of time to try to give honor to all of you valiant men who fought in the Korean War, but also to those who never made it back,” Gonzalez told the veterans during the memorial rites.

“We would like for our youth never to forget the bravest, the truest and the noblest of our Filipinos in the war,” she told around 50 of the surviving veterans, fondly called “super seniors” for their advanced age.

Honoring the heroes who once defended his country, South Korean Ambassador to the Philippines Kim Jae-shin said spending his day with Peftok veterans was “the most touching, moving and happiest day” since his arrival in Manila in April.

In his remarks at the commemoration, the Korean envoy said he could not find the words to express his gratitude to the veterans before him.

“As a Korean, I’m very much aware that peace is quite fragile,” said Kim, in apparent reference to the continuing tension between the two Koreas.

“It has been said that the true soldier fights not because he hates what is in front of him, but because he loves what is behind him. The same can be said of the men who fought in the Korean War,” he said.

He cited the courage of Peftok soldiers to rally behind democracy and independence, helping shape what is now a free and robust nation.

“In 1950, men with indubitable principles, men like the soldiers that made up the Peftok, fought alongside South Korean troops not because they hated the invaders, but because they believed in preserving the democracy and independence of the country,” said Kim.

As a continuing expression of thanks to Peftok, the South Korean government has been providing scholarships to veterans’ descendants, currently numbering 175.

“Your numbers were not that big, yet the impact of your timely presence and actions in many engagements have been crucial, where the loss of a position or two would have spelled defeat for UN forces,” he said.

“Your gallantry is part of the tradition of excellent service, which we, the active members of the force, strive to achieve even in the smallest of tasks,” the Army chief said.

Gonzalez hoped the bravery that Peftok soldiers showed 65 years ago would strike a chord not just among those in service, but also among today’s youth. The advocacy for peace is, after all, a timeless endeavor.

“As you know, North and South Korea have a very tenuous relationship. It’s very strained. Tensions are very real and very present. Can you imagine what would have happened if the UN and the 16 countries that went didn’t take that action?” said Gonzalez.

She cited the Peftok veterans’ pride and nationalism as “traits that we can now communicate to our youth.”

“There are so many soldiers in the line of fire today, whose families live in fear, and in pain, and anxiety. What are we doing about it? As my grandpa once said: ‘The sleep of the heroic dead is never peaceful.’ What are we, the survivors, doing in the interest of peace?” Gonzalez said.

As Venturina put it, nobody wins in any war.

“As much as possible, nations should not go to war… A state of war is very ugly,” said the veteran.

“As much as possible, they should exert all efforts to negotiate and iron out their differences. Because in war, there’s no winner. Both victor and loser, they are all losers,” he added.—Tarra Quismundo