DFA: No reports yet of Filipino casualties in Mecca crane crash 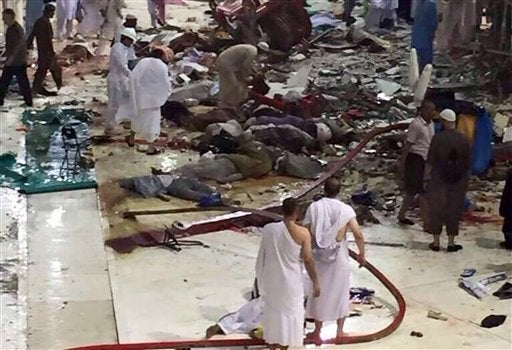 Pilgrims and first responders gather at the site of a crane collapse that killed dozens inside the Grand Mosque in Mecca, Saudi Arabia, Friday, Sept. 11, 2015. The accident happened as pilgrims from around the world converged on the city, Islam’s holiest site, for the annual Hajj pilgrimage, which takes place this month. AP Photo

No Filipino casualties were immediately reported after a massive construction crane crashed into Mecca’s Grand Mosque in Jeddah, Saudi Aurabia on Friday, the Department of Foreign Affairs (DFA) has said.

‘Our Consulate General in Jeddah has confirmed that there are no reports so far of Filipinos hurt or killed in the mishap in Mecca,” Foreign Affairs spokesman Charles Jose said in a text message to INQUIRER.net on Saturday.

Saudi authorities said 107 people were killed and 238 were injured after a crane crashed into Mecca’s Grand Mosque during a stormy weather.

The accident happened just before millions of Muslim pilgrims are expected to visit Saudi Arabia this September for the yearly hajj pilgrimage. IDL