Groups urge immigrants to naturalize as U.S. politics gets uglier 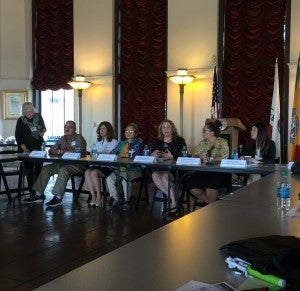 Panelists at Los Angeles City Hall raise their concerns on the low rates of naturalization. PHOTO BY CHRISTIAN ESTEBAN

LOS ANGELES – Every immigrant always dreams of having a secure life in the United States. So how come they’re not rushing to apply for U.S. citizenship?

To mark U.S. citizenship month, panelists from several organizations examined the phenomenon of low rates of application for citizenship, during a forum on September 3 at the Los Angeles City Hall.

Some 2.5 million green card holders from California (the leading state in terms of high numbers of lawful immigrants, which includes the 400,000 green card holders from Los Angeles alone) out of almost 9 million across the nation are eligible to become U.S. citizens, according to Linda Lopez, chief of the Office of Immigrant Affairs at the Los Angeles Mayor’s Office.

The Department of Homeland Security shows that Mexico is the leading country of birth of new citizens with 99,385; while the Philippines has 43,489. The populous state of California has the largest number of persons naturalizing with 164,792, followed by New York and Florida.

But only roughly eight percent of immigrants across the country sign up for naturalization, according to New America Media Executive Director Sandy Close.

According to the U.S. Citizenship and Immigration Service, being a U.S. citizen becomes “the most important decisions in an individual’s life” and provides a sense of security.

Aside from receiving American passport (where traveling in certain countries do not require visas) and participating to vote, U.S. citizens also have the right to receive full Social Security benefits, loans and mortgages, family petition, education — to name a few.

Panelists say there are many that obstacles green card holders face in becoming naturalized citizens, such as the cost of application fee and lack of citizenship information.

Application costs is one of the main reasons permanent residents are discouraged from applying for naturalization.

Citizenship project director Nasim Khansari of Asian Americans Advancing Justice-Los Angeles say some applicants cannot afford to pay the citizenship fee of $680 because of the low household incomes of many multiple-member families.

However, the U.S. Citizenship and Immigration Services provides a fee waiver by filing a I-912 form for applicants experiencing financial hardship.

To become eligible for a fee waiver request, an applicant must be getting a government benefit and the household income must be at or below the 150 percent of poverty level.

But lack of information results in low naturalization rates. Permanent residents must be informed that public libraries, non-profit organization and religious institutions offer citizenship class and workshops to familiarize them with American laws and government structure. They can also enhance their language skills by taking English as a Second Language (ESL) classes.

The New Americans Campaign, for example, has assisted nearly 169,000 lawful permanent residents in applying for citizenship since July 2011 and held over 2,750 naturalization workshops and applications clinics.

But clearly, concerted efforts are needed to help ease immigrants’ transition to U.S. citizenship. The future of American politics also hangs in the balance.

Immigration has become a burning issue for 2016 elections, mostly due to some extreme proposals made by some presidential contenders.

Republican presidential candidate frontrunner Donald Trump proposes the deportation of all undocumented immigrants. He also claims that Mexico must pay for a border wall because of Mexicans entering the country illegally.

Former Florida Governor Jeb Bush, meanwhile, got negative remarks on birthright citizenship when he described Asian mothers as the main sources of “anchor babies,” meaning they come to the United States while pregnant and give birth here to secure American citizenship for their offspring.

To gain a voice in the polarized debate on immigration and prevent any unjust policies, green card holders must try to become U.S. citizens and vote.

“The process [of naturalization] is really fast, 4-5 months in Los Angeles,” said Khansari, of Asian Americans Advancing Justice-Los Angeles. “If an immigrant applies now, then she will be able to make it in time to vote in the 2016 elections, especially that immigration is such a hot topic.”

But even after naturalization, voting doesn’t come naturally. The Center for the Study of Immigrant Integration at the University of Southern California found that naturalized citizens are less likely to vote than the American-born. So voter education and registration are also necessary. Once registered to vote, naturalized citizens’ electoral participation improves.

“Educate yourself on citizenship benefits by getting in touch with the organizations to help you process the application,” Khansari urges.

With the celebration of Citizenship Day on September 17, the community organizations are encouraging green card holders to start their naturalization application by attending free citizenship workshops (mostly in public libraries) and getting free legal assistance (provided by the non-profit organizations) to have a better awareness of the benefits of citizenship.