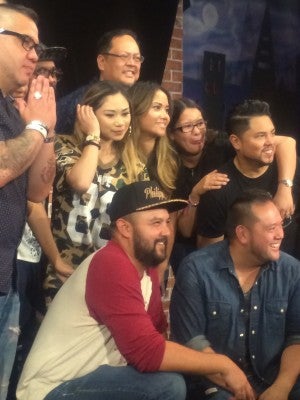 LOS ANGELES — Fil-Am comedians teamed up for a West Coast comedy tour that had a cool-looking L.A. crowd laughing at the hilarious facets of Filipino life in the U.S., and it’s all for charity.

The mostly Filipino audience jiggled love handles for each comedian the room that funnyman Joey Guila called a “bomb shelter in Cerritos.”

Some ladies held tight onto their bomb shelter seats after insult comedy pro Michael Quu asked, “Where are all the ladies at?! (four ladies scream) Alright! We got seven of ‘em!”

Before anyone in the audience could wonder, Rembrandt Sabelis declared, “I can assure you guys I am actually Filipino. My mother is from Cavite, OK? Do you guys ever go through your photo albums from like the ‘80s, you always see that one white guy in every family photo? Yeah, that’s my dad. That makes me mestizo right?”

The event suited for an 18-and-over crowd was a perfect time to bring up parenthood.

Michael Quu complained, “All the girls in L.A. are insane! Every girl I know is on some ridiculous diet. Their like: I’m vegan, I’m gluten, I’m GMO, I’m non-dairy and I don’t even exhale anymore!” (Sucking in his cheeks and trying not to exhale.)

Guila probably ate somewhere most Filipinos in L.A. don’t live, as he explained, “I’m Filipino man and people don’t think I’m Filipino man. Every time I go to LA their like…’Hey! Are you from El Salvador? Are you speaking Spanish?’ And I’m like ‘open what door?”

By the end of the night all the seven ladies managed to keep their “fanties” on, coming out of the venue screaming, “Filipinos are punny!”

The tour is a fundraiser for the Apl.de.ap Foundation.

“I’ve known Ted (Benito) and Apl for a long time and it is something we wanted to do, to attach a Filipino charity to the show, and I’m just happy that shows sold out!” explained Sabelis.

Allan Pineda Lindo better known as ‘Apl.de.ap’ told INQUIRER.net, “I love comedy! It’s one of my favorite things to watch! Some of these proceeds will go to Tacloban and Zamboanga.”

The Apl.de.ap Foundation collaborates with various organizations and groups to build infrastructure and improve the lives and health of people in the Philippines through programs in arts and technology.