LONDON — A long excerpt from Turkish director Köken Ergun’s short film, “Binibining Promised Land” (2010), which features an interview with Marylou Sulit Muga, a Filipina caregiver based in Israel, screened at a contemporary art film exhibition Wednesday, August 26 at the Institute of Contemporary Arts in Central London.

Opening with shots from a lively Binibining Pilipinas Israel competition, the film tells of OFWs enduring poor working and living conditions but emphasizes the positive social lives they lead in spite of their restricted circumstances.

Muga, who cares for an elderly Israeli woman in Tel Aviv, discusses her loneliness at being in a foreign country and thanks the community spirit of her fellow OFWs for alleviating her sadness.

“To the Filipino people, everywhere you go, we are one big family,” says Muga. “Filipinos [are] the most resilient and happiest in the world.”

Although Muga gets only three single hours of free time every week, she remains grateful for the chance to see her friends and to write articles for the Filipino-Israeli magazine, Pinoy na Babasahin. “There [are] handsome dollars here in Israel,” says Muga. 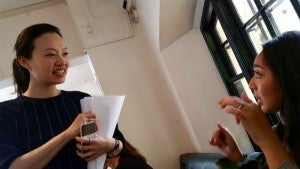 She further describes the positive contribution of OFWs to their destination countries. “OFWs help save the country. Our remittances help the country. In every nation’s success there is a Filipino [behind the scenes].”

The statement of the exhibition titled “The Promised Land,” which was organized by contemporary art curator Anna Miyoung Kim, notes that despite global efforts to control migrant workers inflow and improve migrant wellbeing, “the number of migrant workers keeps increasing… and their working and living conditions in destination countries haven’t been improved as proportionally as the number of workers increased.”

The International Labour Organisation (ILO) has estimated that there are currently 232 million migrant workers around the world.

“Often, migrant workers have been targeted for the exploitation of vicious employers due to their vulnerable legal and/or contract status and their human rights have been ignored and/or violated in many forms; marginalization, discrimination, sexual abuse, etc.,” the exhibition statement continues. 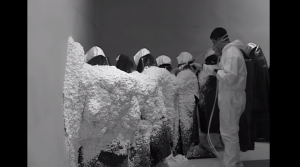 Other projects in the exhibition included artist-activist Kyoungju Park’s “Migrant Workers’ Election Campaign Performance,” which depicts a hypothetical political campaign of a Bangladeshi migrant worker running in Korean elections; Ekta Mittal and Yashaswini Raghunandagn’s “Presence,” which explores the desires and memories of migrant workers in Bangalore; and controversial artist Santiago Sierra’s “Polyurethane Sprayed on the Backs of 10 Workers,” wherein ten Iraqi migrant workers wpaid minimum wage to stand facing a wall and have their backs, covered by plastic sheets, sprayed with hazardous polyurethane.