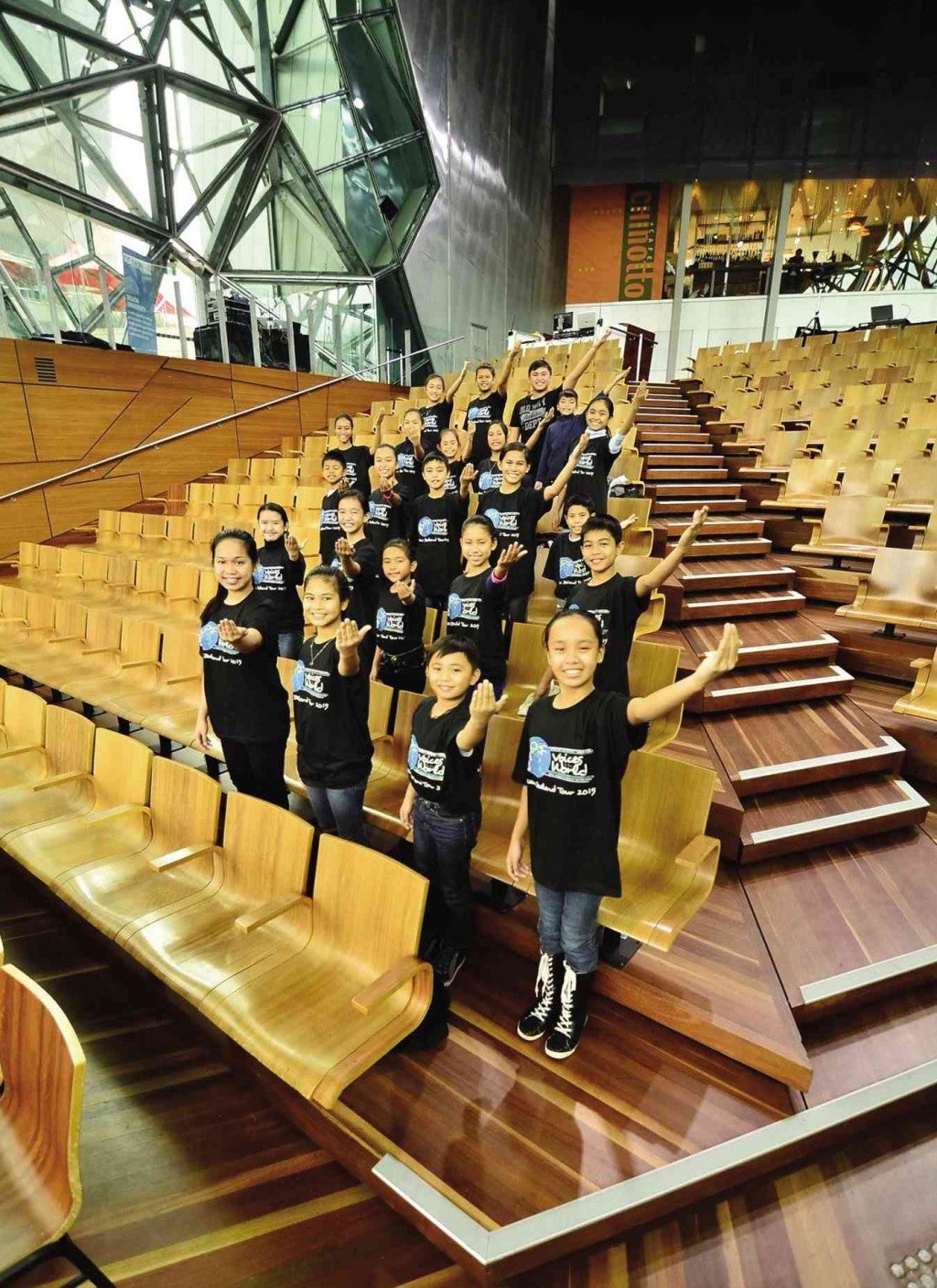 ‘You Raised Me Up’ This is the song the children’s choir sang to say a world-wide thank you for all the help to rebuild post-quake Bohol.

WARMING the hearts of Australians and Filipino-Australians in the middle of winter, the Loboc Children’s Choir recently packed the concert halls in Melbourne, Canberra and Sydney as part of their Australia and New Zealand tour.

In Melbourne, the choir and Dulaang Kasing Sining featured the inaugural performance of “Bohol Rising: The Concert Musical.”

Written by Marianito Luspo, directed by Lutgardo Luza Labad under the musical direction of Alma Fernando Taldo, Bohol Rising: The Concert Musical combined drama, dance, song and screen to narrate the Boholanos’ experiences before, during and after the 7.2-magnitude earthquake of October 2013.

The three-act musical started with a glimpse of a typical pleasant day in Bohol through the lens of four characters: Canor the fisherman, daughter Jennylyn, a nurse working in the US, Mayor Roger and Fr. Tommy.

To mark the beautiful day that it was, the Choir sang songs of joy: “Salve Regina,” “Look at the World” and Visayan songs such as “Kruhay” and “Inday Pamutos na.”

Then the earthquake struck at 8:13 a.m. of Oct. 12, 2013. Animated screens showed images of houses crumbling, roads splitting open and churches collapsing. Amid the screams and chaos, the characters narrated how despite their own injuries, they tried to comfort those around them.

The Choir calms the wounded with their songs, “Ave Maria,” “When You Believe,” “Nella Fantasia,” “Paraiso” with interpretative dances, Ryan Cayabyab’s “Nais Ko” “and the crowd stopping “The Prayer.”

The final act featured Bohol’s rebuilding efforts with the help received from around the world. Acknowledging the audience and the world, the choir then sang a touching rendition of “You Raise Me Up.” They then performed an energetic and well-choreographed “Disney Medley,” “Go On Board,” “Kalesa” and “I Will Follow Him” from the film “Sister Act.”

To end the show, they tugged the Melbourne audience’s heartstrings with “I Still Call Australia Home” and received a standing ovation.

Produced by the Diocese of Tagbilaran, Bohol Rising is a fundraising effort to rehabilitate the damaged churches and schools. The choir’s concert tour also included an opportunity to connect with Australian communities.

In Melbourne, the choir visited Strathewen Primary School, a two-hour drive from the city, where they shared their stories of disaster and resilience with the schoolchildren and the local community.

The Strathewen community in Northeast Victoria experienced despair and destruction during the 2009 Black Saturday bush fires. In Loboc and in Strathewen, music became a powerful means to help heal their disaster-stricken communities through the Loboc Children’s Choir and Chocolate Lilies.

Overall tour manager Gardy Labad said, “It was a magical encounter to share similar stories with our friends in Strathewen, and how music helped in our recovery.”

Chocolate Lilies’ director Nerida Kirov who lost nine of her own friends in the fires said the choir has always reached out to those in the community in need so it was natural that they did so then. Like Labad who ran arts therapy workshops to bring back the communities’ energy, Nerida organized workshops to connect the communities.

She said the Lilies’ as she calls them, created spaces where grieving people could simply “be.” “They didn’t have to sing. They could just come and sit down. They bathed in it and slowly they became part of it. You could see the relief that it gave people.”

The visit ended with both choirs singing together. While the memories of these tragedies remain for the communities of North East Victoria and Bohol, their bond through the power of the arts serves as a chance for renewal.

The Loboc Children’s Choir Melbourne tour was a project of the Melbourne Organizing Committee chaired by Royal Melbourne Institute of Technology’s Robbie Guevara with the support of Consul Felix Pintado, Philippine Consulate of Victoria and Fr. Litoy Asis, Filipino Chaplaincy of Victoria.

The Philippine Embassy hosted the choir and the Boholanos in Canberra. Friends Australia organized the two shows in Sydney. Oishi generously sponsored the choir’s travel to Australia and New Zealand.