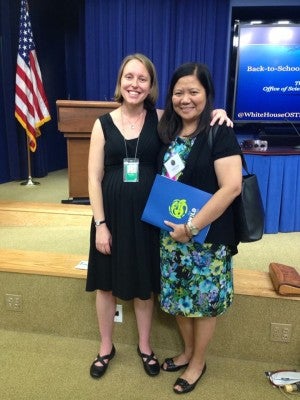 SAN PEDRO, California — Science teacher Jennifer Suzara-Cheng, from this small coastal town in Southern California, sat at the Eisenhower Auditorium of the White House on August 20 with 200 outstanding individuals invited by the Obama Administration to participate in its Back-to-School Climate Education event.

The group was made up of exceptional high school students, educators and key leaders in the education community from government, academia, philanthropies, non-governmental organizations and the private sector, identified by the U.S. government as critical to the integration of climate education in schools in order to reduce greenhouse gases.

“I was invited as part of Green schools, Inc. that gave me the award for Green-o-vation Educator Award last May in Boston,” Suzara-Cheng, who immigrated from Camarines Norte some 12 years ago, said in an interview with this writer.

She is a graduate of Ateneo de Naga and teaches at the second largest public school system in the U.S., the Los Angeles Unified School District (LAUSD).

“I felt honored and privileged to be part of this consortium at the White House, it was a great group of like-minded people with a common goal to make sure that we disseminate information about the state of our planet,” she added.

She promised not only to bring the warning signals of global warning–and prevention practices– to her classroom, but also coordinate hands-on science fairs in collaboration with other schools in LAUSD.

“For me it was a bonus that I get to witness Dr. Sullivan in person because she is one of my favorite scientists,” she gushed. Sullivan, who headed the list of presenters, was one the first six women to join the NASA astronaut corps in 1978 and holds the distinction of being the first American woman to walk in space. Sullivan is now Under Secretary of Commerce for Oceans and Atmosphere and National Oceanic and Atmospheric Administration (NOAA) Administrator.

Sullivan announced that the year 2015 has the hottest temperature ever recorded, and July was the hottest month. “All of us came out of the event with a strengthened passion to make a difference in our work sites,” said Suzara-Cheng

The White House meet underscored that danger that if the world population doesn’t cut down carbon consumption, the Earth’s temperature will continue to intensify, causing sea levels to rise followed by the continued warming of oceans.

“We’ve seen the effects of global warming in our own home country, such as in typhoons Yolanda and Haiyan as well as those experienced in New York City in 2012 in Hurricane Sandy,” said Suzara Cheng.

Suzara-Cheng identified the following examples of actions that the population could take to address global warming or a decrease in fossil fuel burning:

She offers to any one or any interested groups, access to seeds to create micro-gardens. “I can help start a pollinator garden in any small space just like what we started at St. Filomena’s church in Carson.”

The focus of the White House climate event, said Suzara-Cheng was to ensure that educators are empowering the youth as decision-makers and leaders, creating events where they could network and utilize resources available.

“We have to start thinking about raising a generation of Global Citizens. In our search for common good little things will count and will add up to bigger steps. We are at an opportune time to make a difference wherever we are anywhere on our planet,” she emphasized.

Reaching out to PH local gov’t

“I am looking forward to a global networking with anyone who is interested in spreading climate education, and I want to take this opportunity to reach out to our motherland, to those who may be interested to collaborate and do our respective personal commitment to help the environment. It does not matter where we are; we should all be stepping up for our common good,” Suzara-Cheng stated.

Kudos for her achievements in environmental education and protection have poured in from local governments including those from LA Mayor Eric Garcetti and from her provincial “Office of Sangguniang Panlalawigan of Camarines Norte, Bicol, Philippines” through a resolution authored by Vice Governor Jonah Pimentel, which also referred to her nationalist ancestor, her great grandfather General Vicente Lukban.