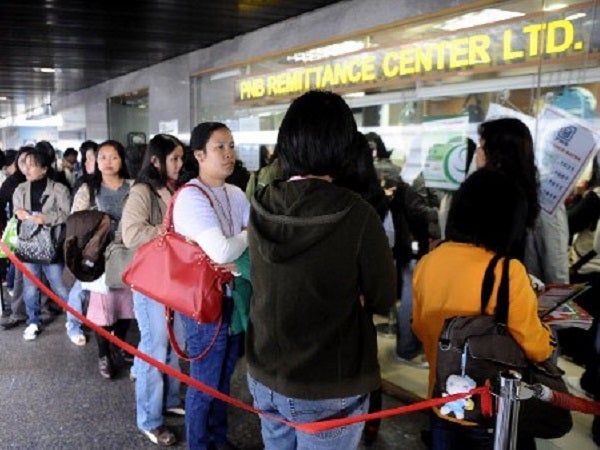 In this 2008 photo, Filipino domestic workers line up to send money at a remittance center in Hong Kong. AFP

Migrante party-list, a group protecting the rights of overseas Filipino workers, has declared the success of Friday’s “Zero Remittance Day.”

“We declare today’s Zero Remittance Day a success and resounding declaration of OFWs’ unity and collective action against any and all moves by the Aquino government to scam us and treat us as nothing but milking cows. We have once again proven that we are worth much more than the dollars, and the balikbayan boxes, we send,” the group said in a statement.

OFW groups and communities in Hong Kong, Taiwan, Singapore, South Korea, Japan, Middle East, Vietnam, Thailand, United States, Canada, United Kingdom, Italy, Belgium, Netherlands, Australia, Switzerland, and other parts of the world have participated in the protest. Here in the Philippines, families have urged their relatives abroad to join in the occasion, according to Connie Bragas-Regalado, Migrante chair.

She said the Aug. 28 protest was called by OFWs around the world to rally against the Aquino government and the Bureau of Customs’ imposed P600-million revenue target from balikbayan boxes.

“For as long as the P600-million target collection stays, the BOC is given license to ransack our balikbayan boxes or impose other tax schemes. In fact, we have received reports from families who still received ‘inspected’ boxes even after the BOC order was issued. Our main demand today is for the Aquino government to retract its P600-million target collections on OFWs’ balikbayan boxes now,” said Regalado.

She said the Aquino administration’s most recent statements “belittling” the Zero Remittance Day “further incited OFWs and their families.”

Migrante affirmed estimates by some economists and a senator of a P3.1 billion-loss for today’s Zero Remittance Day.

“Those who belittle our political exercise also look down upon our strength and unity as a sector. Our message today is clear: The migrant sector is a force to reckon with. Those who have insulted us will feel the brunt of OFWs and their families’ ire this coming election season. We have millions of overseas absentee voters, we have millions of relatives back home who are voters. Let today’s Zero Remittance Day serve as a preview of the migrant sector’s unity come election time,” Regalado said.