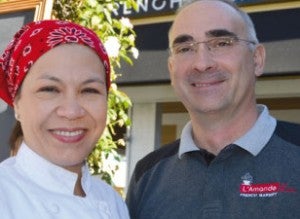 Two stunning developments have left a $1-million dollar trafficking lawsuit in California involving the bakeries of Ana Moitinho de Almeida, her husband Goncalo, and now her father, Philippines Social Security head Juan Santos in an uncertain state with an initial court date a month away in September.

But Ana Moitinho de Almeida, who left for the Philippines, is acting like MacArthur; she says she will return.

It’s a new twist after attorneys for the plaintiffs in the civil suit–11 workers of the Almeidas’ who have made claims that include trafficking, immigration visa abuses and labor violations at the L’Amande Bakeries in California—filed statements in court last week.

The workers’ attorney say the Almeidas have told their own attorneys to “stand down.”

Attorney Laboni Hoq, of Asian Americans for Advancing Justice told the court the Almeidas left the country prior to August 4 and had instructed their lawyers to cease defending the lawsuit.

As reported in this column, the Almeidas have also been in the process of selling and transferring their assets—two bakeries, a home and an apartment building—a strategy that would put any assets out of reach of the court. The strategy seems to have included the Almeida home being transferred to Ms. Almeida’s father, Juan Santos, by foreclosing on his own daughter.

If the Almeidas have no intention of returning to the U.S., the result could be a default judgment against the Almeidas who seem to be doing all they can to be judgment-proof.

But when reached late Wednesday, Ana Moitinho de Almeida was adamant about returning to defend the suit.

“I am now in the Philippines for a holiday but have every intention to return,” Almeida wrote in an e-mail to me. “However, since the bakeries are now closed, my return trip will now be determined by our lawyers who will let me know when I am needed back. I am hoping though that this will be in a month or thereabouts.”

The opposing attorneys, however, are under the assumption based on her lawyers’ representation to them that the Almeidas are defaulting.

“Because the Almeidas have stopped defending the case in court, they essentially concede to liability on our claims and entitle us to a default judgment against them,” said attorney Hoq.

But the Almeidas may have changed their minds after the court just this week denied a motion by the workers to attach the Almeida assets to the suit.

The denial was based on the court seeing the plaintiffs’ wage and hour claims as not meeting a standard of being “fixed and ascertainable.”

The court also acknowledged that the Almeidas had produced evidence in rebuttal. But the denial of the motion to attach assets was limited and did not evaluate the evidence in terms of the merits of the overall case.

The ruling did appear to give the Almeidas some confidence. But there was still some hesitance when I asked more specific questions of Ms. Almeida about returning to the U.S. to defend case.

“Although I am happy about the court’s finding with regards to a denial (of the workers’) intention to attach the assets, our financial position remains unchanged. Even if we would like to defend the case aggressively (and we do), without funds, it becomes really difficult,” Ana Moitinho de Almeida said in her e-mail. “It is my biggest wish to see this case till the end, as I’ve said many times. Unfortunately, financial realities dictate that unless we find funding somehow, we may not be able to do this.”

Is she, as they say, having her bibingka and eating it too?

Last time I checked, Facebook is not an official court of law.

But that’s where the Almeidas have continued to post evidence countering their employees’ claim that they were underpaid, abused and trafficked while employed at the Almeida’s now shut down L’Amande Bakeries.

“We have taken to Facebook because it is the only way we can defend ourselves in the public’s eye,” said Ms. Almeida. “We have the evidence to prove every single false claim they have made. What have they given the public but tears and self-serving statements? …Your claim that we have opted for Facebook instead of the court of law is ENTIRELY FALSE. We have prioritized our presentation of evidence to the court ABOVE all else. We have adhered, respected and followed the rules of court and will continue to do so. We have posted but a drop of what we have on FB.”

Yet, as Ms. Almeida says she may or may not come back based on her finances.

Hard to imagine that the daughter of one of the Philippines wealthiest and powerful business families is pleading poverty here and is on a budget.

But that’s what it sounds like. I’ve always said the court will decide who is telling the truth.

The first court date is set for the latter part of September, unless the Almeidas decide to default and stay in the Philippines for good.

But that’s an odd strategy if you think you’ve done nothing wrong.

It strikes me as far better for the aggrieved workers and the Almeidas both to let an impartial judge decide the truth. That’s the American way. Unless as an elite, you prefer the way things work in the Philippines.