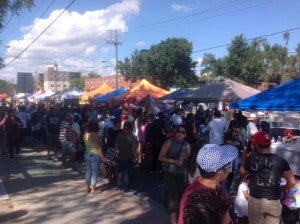 TORONTO, Ontario — Filipinos adore fiestas no matter what part of the world they happen to be in, and Taste of Manila 2015 was one tremendously successful fiesta for sure.

The heady combination of hot summer sun, enticing cooking aromas and cool Filipino music was just the magnet for drawing record numbers of festival goers to the Bathurst and Wilson corridor in Toronto’s North York area. 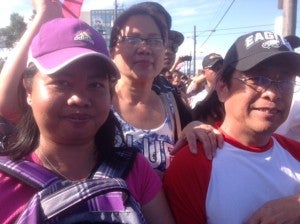 Mayumi Abubu from Ilocos Norte (left) and Relly and Mike Gomez from Pampanga, wait patiently for star Jericho Rosales to make his entrance.

The food vendors drew the most queues, and attendees chewed and guzzled, chomped and slurped their way from one end of the festival route, the intersection of Bathurst and Wilson, and north on Bathurst to Laurelcrest four blocks away.  Both the north and southbound lanes on Bathurst were closed to traffic, and most of the side streets were blocked off so festival goers could park and walk to the event. 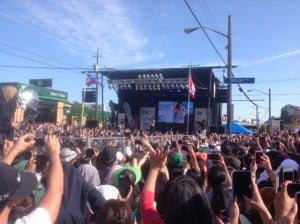 “Imported” Filipino heartthrob Jericho Rosales drew screams of adulation from the crowd when he finally strode onto the stage around 5 p.m. Sunday.  Echo, a TFC mainstay, appealed to both young and old, and one tiny white-haired lady commented that the crush of adoring fans reminded her of the Nazareno procession in Quiapo, “Pero kulang na lang ng lubid” (Only the ropes are missing).

Taste of Manila 2015 may only be a memory now, but attendees are already looking forward to coming back next year.  In the meantime, those craving the flavors of the islands may visit their favorite food providers at their actual locations:  Cusina, Kabalen, Jollytops, Marcelina’s, Via Kitchenette, Atin Ito, Bella’s Lechon, Lola’s Kakanin, Ilocandia, Asian Core, Jolly’s Grill, Super Bakers, Panago, Suero Enterprises, Mokshia Restaurant, Kapitbahay and Max’s, among others. 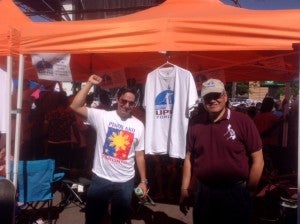 Rafael Fabregas (left), PRO of Universityy of the Philippines Alumni Association of Toronto and Fred Gamboa, last year’s UPAAT president, are glad that UP alumni festival goers have been flocking to the UPAAT tent to register and become members of the association.