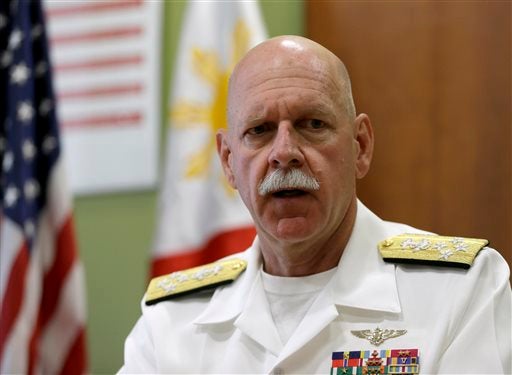 The commander of the US Pacific Fleet on Tuesday affirmed the US commitment to peace and security in the region, but stressed the importance of having a positive relationship with China despite rising tension in the disputed South China Sea.

Adm. Scott Swift, who has been in office barely three months and is on a tour of Pacific countries, spoke to journalists in a telephone press conference from Kuala Lumpur.

After his visit to the Philippines last month, Swift went to South Korea, Japan, Australia, New Zealand and Malaysia.

“We seek a positive relationship with China… we have several mechanisms which have been in place,” Swift said, when asked about China’s reclamation activities in the disputed South China Sea, parts of which are being claimed by the Philippines, Vietnam, Brunei, Malaysia and Taiwan.

Swift cited the Code for Unplanned Encounters at Sea, the 2014 agreement reached by Asia-Pacific countries aimed at reducing incidents at sea between countries.

“That is working quite well. The US is interested in expanding this mechanism to the Chinese Coast Guard as well,” he said.

He, however, reiterated the position of other US officials that China’s reclamation activities were “troubling” because of their “scope and scale.”

“What more can be done? I stress the importance of engaging others in the region that have a similar concern,” Swift said.

“What is important is to come together in a multilateral way and approach and reconcile the differences of claims within the region in a positive way and not allow the use of coercion or force as a lever to the benefit of one party,” he added.

The US official said there was a need to pursue multilateral military exercises in the Asia Pacific, instead of holding bilateral exercises.

“Multilateral exercises optimize the resources that we have,” he said, noting the US’s plan to position 60 percent of its naval resources in the Asia-Pacific as part of its “pivot to Asia” strategy.

“We want to increase the utility of those forces. The best way to do that is through multilateral exercises instead doing exercises with three different countries separately.

Last June, the US, Japan and the Philippines began joint naval drills, called the Cooperation Afloat Readiness and Training (Carat), in Palawan.