UK-based charities to fete Filipino fashion and fabrics in London 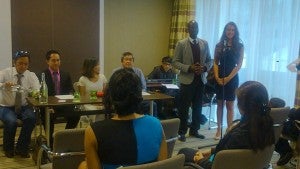 LONDON – Organizers of a first-of-its-kind fashion event in the United Kingdom to promote Philippine fabrics held a pre-launch August 16 in Westfield, Stratford ahead of the September event itself.

“Appellation of Origin: The Philippines” is a platform dedicated to celebrating Filipino artistry and imagination in the form of fashion and crafts unique to the Philippine culture.

Its press pre-launch of took place at the Holiday Inn in Westfield. The actual event will take place on September 10 at Porchester Hall in West London.

Funds raised at the event will support four Philippine charities based in Europe – namely, WELL Trust, Ajos Trust, ENFiD (European Network of Filipinos in the Diaspora), and ENFiD-UK.

The first fashion event of this kind was held in Rome, Italy, over three days in 2014, called “Fibbre Filippine.” 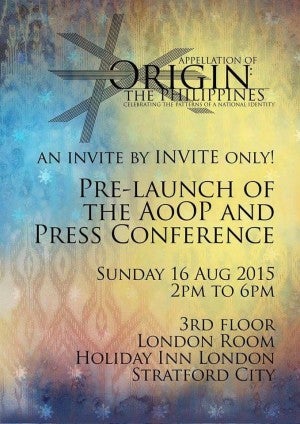 Around 400 guests hailing from the Philippines, UK, Europe and the United States are expected to attend, with a strong UK-Filipino community presence.

The press conference introduced the four charities to benefit from the event, as well as the two Filipino fashion designers to be showcasing their designers.

Event organizer Aimee Alado, who is also the chair of ENFiD-UK and founder of WELL Trust, said, “We are very excited and feel privileged to announce the launch of the event which we have been preparing for some time now.”

“’Appellation of Origin: The Philippines’ is an opportunity to demonstrate the wealth of Philippine culture to the UK community, for a good cause,” she added.

“It is hoped that the event will be the starting point for charitable activities in the UK for years ahead and make cultural bonds between Philippines and UK even stronger,” Alado concluded.

For those based in the UK, tickets are still available for purchase through www.aoop.london. Prices range from £70 to £140. —@melissalegalc