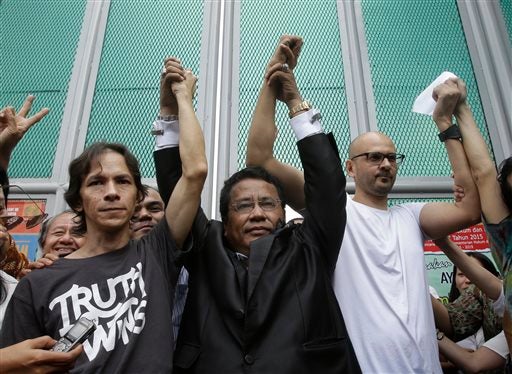 Indonesian Canadian teacher Neil Bantleman, right, and Indonesian teaching assistant Ferdinant Tjiong, left, raise their hands as they stand with lawyer Hotman Paris Hutapea, center, after they were released from Cipinang prison in Jakarta, Indonesia, Friday, Aug. 14, 2015. A Canadian teacher and an Indonesian teaching assistant serving 10 years in an Indonesian prison for child sexual offenses were released Friday after a court overturned their convictions.(AP Photo/Achmad Ibrahim)

JAKARTA, Indonesia — A Canadian teacher and an Indonesian teaching assistant serving 10 years in an Indonesian prison for child sexual offenses were released Friday after a court overturned their convictions.

Neil Bantleman, 45, and Ferdinant Tjiong were greeted by tearful family and cheers from friends and dozens of teachers from their former school as they walked out of Cipinang prison in eastern Jakarta.

Bantleman and Tjiong were convicted in April by the South Jakarta District Court of violating Indonesia’s child protection law. They maintained their innocence and appealed to the Jakarta High Court. The two men were supported by fellow teachers and the principal at the Jakarta International School, now called the Jakarta Intercultural School.

“I want to say thank you to you all for believing in us,” said Bantleman, who repeatedly hugged and kissed his wife. “We’re happy that the truth has finally come out.”

The release of the men came after the Jakarta High Court overturned their convictions of sexually abusing students who attended the school’s kindergarten and who are now 6 and 7 years old. The school is attended by children of foreign diplomats, expatriates and Indonesia’s elite. It has 2,400 students aged 3 to 18 from about 60 countries.

“The truth is finally revealed and justice has been done,” said Hotman Paris Hutapea, an Indonesian lawyer representing Bantleman and Tjiong.

He has said that the sexual abuse claims were motivated by money. The principal and a number of other teachers have alleged the same. The mother of one of the children had sued the school for alleged negligence and was seeking $125 million in compensation.

On Monday, the same district court that convicted Bantleman and Tjiong threw out the $125 million civil case. It said it was not proven that any of the alleged abuses had taken place. New evidence from medical reports from three different hospitals in Jakarta and Singapore showed no major injuries or abnormalities in the three children, the court said.

The Indonesian rulings come after a court in Singapore ruled July 16 that the woman accusing Bantleman had defamed him, Tjiong and the school because the allegations of sexual abuse could not be proven. It ordered her to pay $164,700 in damages. The case was brought in Singapore by Bantleman’s family because the initial allegations were made in Singapore through emails, texts and other digital communications.

Hutapea said both decisions had an impact on the higher court’s decision to free Bantleman and Tjiong.

The arrests of Bantleman and Tjiong in July last year followed allegations from parents of a 6-year-old boy at the school that he’d been sodomized.

Four male janitors were sentenced to eight years in prison in that case and a woman received a seven year prison sentence as an accomplice. Police said a sixth suspect killed himself in custody by drinking bathroom cleaner.

Hutapea said a copy of the higher court decision has to be taken to the district court to start the process of getting his clients released from prison.

Prosecutors could not be reached for comment. The Jakarta High Court’s decision could be appealed to the Supreme Court.