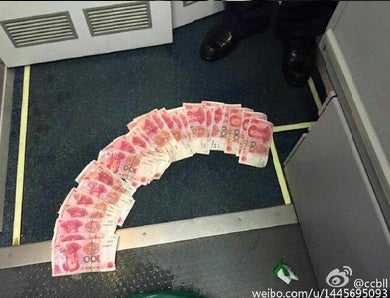 In a statement, lawyer and CEB officer-in-charge for corporate affairs Paterno Mantaring Jr. said that the company has been informed of the theft and has been “conducting a thorough investigation in parallel with an independent third-party investigating body.”

A report of the incident, taken from a China-based daily and circulated Thursday on the social networking site Facebook and on Twitter, said that the August 11 flight from the Kalibo International Airport had just landed at the Changsha Huanghua International Airport in China when the theft was discovered.

Three passengers reportedly found out that they lost cash, amounting to 8,000 Yuan, from their baggage and sought the help of local authorities. The immediate response of the police resulted in the recovery of some of the missing money from inside the aircraft.

Likewise the suspected thief, identified in the report as a male steward, had allegedly tried to get rid of the cash in the restroom, throwing them in the trash can and flushing them down the toilet.

It was not clear, however, how the male steward ended up as the primary suspect in the theft.

Even then, Mantaring said, “As part of standard procedure, cabin crew members of the said flight will be placed on paid leave and a non-flying status, pending the completion of the investigation.”

He further assured, “CEB will take the appropriate action, depending on the result of the investigation.”