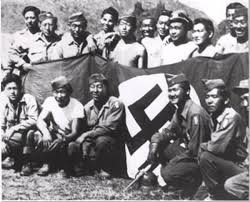 ALAMEDA, California – Personal stories and images by veterans of the Japanese American 442nd Regimental Combat Team, which carried out the rescue of the “Lost Battalion” during one of the fiercest battles of World War II in Europe, will be part of a celebration at the USS Hornet Museum.

“Remembering the Rescue of the Lost Battalion” is part of several celebrations taking place during Living Ship Day at the Museum on Saturday, Aug. 15.

Formed in 1943, the 442nd was a segregated unit made up mostly of Nisei (second generation Japanese American) soldiers. With its “Go For Broke” motto, the 442nd became a formidable and well-respected fighting unit despite lingering prejudice against Japanese Americans, especially in combat roles.

By war’s end, the 442nd had become the most decorated unit for its size and length of service in U.S. Army history, with 21 Medals of Honor awarded.

The story of the Lost Battalion remains one of the most remarkable episodes in the history of the war, and has been recounted in several films and books. On October 24, 1944, the 1st Battalion of the 141st Infantry Regiment, 36th Division was surrounded and trapped by German forces in the Vosges Mountains of France. It was deemed “lost” after repeated attempts by the 2nd and 3rd Battalions of the 141st Infantry Regiment failed to break through to the trapped soldiers.

Although not officially a part of the 36th Division, the 442nd was ordered to attempt a rescue of the Lost Battalion. Short on manpower after bitter battles to liberate Bruyeres and Biffontaine, the 442nd soldiers nevertheless went ahead with what was viewed by many as a suicide mission. On October 30, after taking heavy casualties, the unit finally broke through and rescued the Lost Battalion.

The USS Hornet Museum event begins at 11:00 a.m. with music by the USS Hornet Band. Stories will be shared starting at 1:00 p.m.

The day’s speakers are:

Living Ship Day demonstrations are held onboard the USS Hornet on the third Saturday of most months, and includes a performance by The Hornet Band from 11 a.m. to 1 p.m. On Living Ship Day, the museum comes to life as an operating aircraft carrier, with flight simulations between 11 a.m. and 3:30 p.m., when aircraft are lifted to the flight deck and placed into launch position.

Visitors can meet former crew, sit in the cockpit of a fighter jet, and take in the sights and sounds of naval aviation. Normal museum hours and admission prices apply. Ample free parking is available across from the pier.