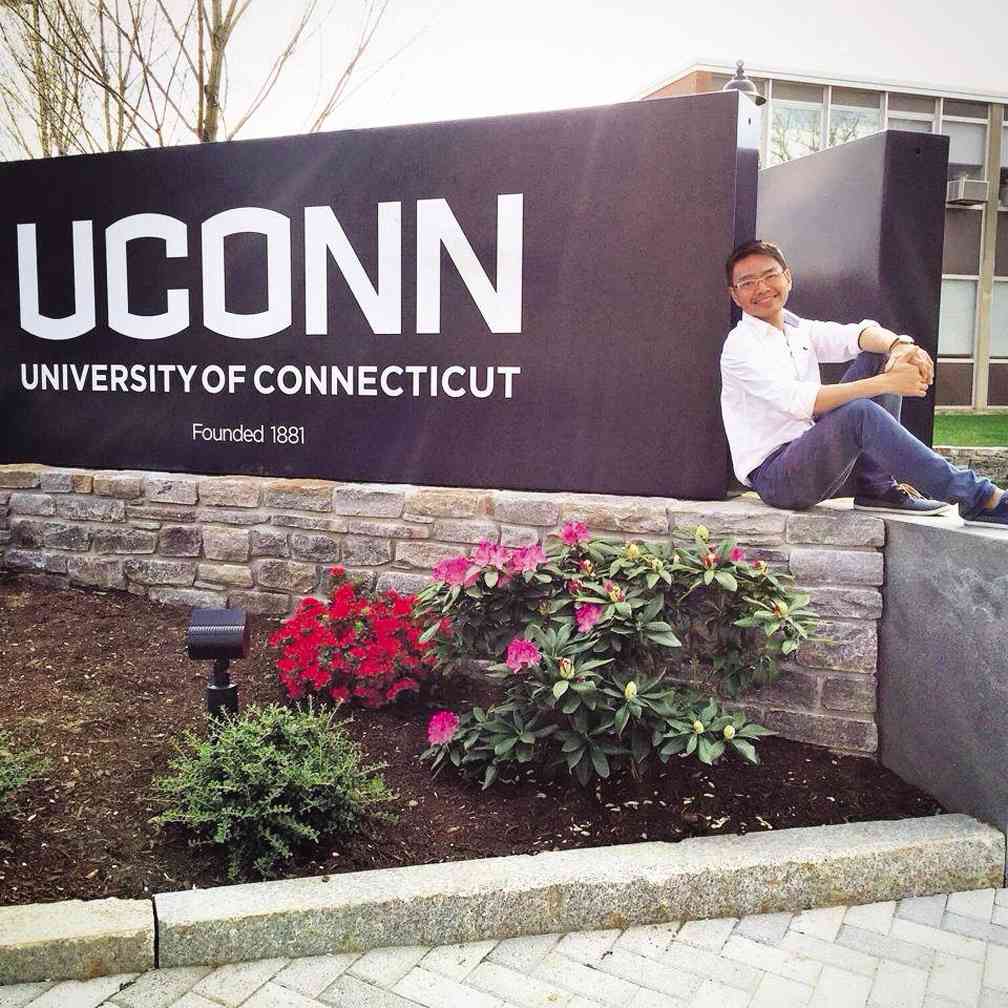 POSTGRADUATE HIGH Raven Ong at the University of Connecticut where he is currently finishing his master’s degree in design.

A LOOK at “The Grand Budapest Hotel,” “Chicago,” “Macbeth,” “Phantom of the Opera,” “Breakfast at Tiffany’s,” “Pan,” “Lord of the Rings,” “Brooklyn,” “Titanic” and other great Hollywood movies and Broadway plays would tell you three things: They all have good stories to tell, extraordinary production craftsmanship, and stellar costumes worn by actors and actresses.

No wonder a Pinoy would want to go the distance and follow their footsteps.

Raven Ong, a graduate of production design from De La Salle-College of St. Benilde School of Design Arts, and currently finishing a master’s degree in design at the University of Connecticut (UConn) has just wrapped up two plays in America, one directed by five-time Emmy Award winner Francesca James (“Lend Me A Tenor”) and the other, by playwright Steve Martin (“The Underpants”).

When he was chosen to represent the Philippines in the biggest and most important theater design festival in the world, Ong was honored and ecstatic, relishing the thought of showing what a Pinoy can do on the world stage. It was not easy.

He had to do a lot of preparation and hard work to finally come up with something worth showing to the world.

In the 13th edition of Prague Quadrennial (Tribes Event) held on June 17, Ong, with Heather Lesieur of the US, Jelena Antanasijevic of Serbia, Tuoxi Wu of China and Pat Ubaldi of Italy presented a new design form: a patchwork of their own country’s culture.

In their presentation, not one country overshadowed the other. Each country’s design was woven together to form a new “tribe” with a unifying purpose rising to life.

“Although we were a tribe, our characteristics and costumes retained the silhouette of our nations. They were constructed on the same fabric to interconnect with each other,” Ong says in an overseas interview.

In dance, Ong and his group’s movements also harmonized to reach full synchronicity. All of them moved as one unit in a style that was made of individual movements introduced at the beginning of the performance.

Ong’s presentation, “Country of Many Nations,” was composed of an international group of students chosen to continue costume design studies at UConn.

In Prague’s main show, “Section of Countries and Regions,” he also showcased his work along with other Filipinos who were also from Benilde: Gabby Fernandez, Jay Aranda and Magda de Leon.

A tradition that began in 1967, the Prague Quadrennial featured live performances of artists from 78 countries, offering tens of thousands of visitors a labyrinth of scenographic work from all over the world.

Ong was born in Manila and grew up in Divisoria. His Chinese-Filipino parents had always been into vegetable trading, often commuting to Baguio. He remembers spending summer vacations with his brother in Baguio because of the business.

Ong went to St. Jude Catholic School where he learned to speak, read and write in Mandarin.

At Benilde’s School of Design and Arts, an academic complex built like a big gallery, Ong developed his skills—designing sets, costumes and props for movies, commercials, television, theater, events and advertising.

As a little boy, he loved the performing arts so much that he lived inside them. He would always join school programs and singing groups.

As his thespic talent developed, he also dabbled in drawing. He joined poster design contests and made costumes for class projects.

Ong refused to design only on paper. He wanted something carefully thought about. Something he envisioned and created in mind, translated and crafted into a sketch, and finally, rendered and molded into something tangible. One that is worn and something that served a purpose, be on a theater stage or something that comes right after.

As someone who loved the arts, Ong naturally gravitated to a college design course, first at the University of Santo Tomas and then at Benilde. The latter he says, gave him a sense of fulfillment that he could never find elsewhere.

“Benilde introduced me to designing. I had inspiring professors who had so much passion that I immediately fell in love with it, from theater to costume and set designs, to mounting a production. I simply embraced it,” he proudly says.

In his years at Benilde, Ong never wasted time. He made the most out of his classes and always gave it his best shot. Trailblazing designers who have made a difference in design excited him, one of the reasons why his production designs had global perspective.

He has always been thrilled by the craftsmanship of Colleen Atwood, Powell and the late Ishioka on film. He admired William Ivey Long, Julie Taymor and Robert Jones for their theater design work. His topmost favorite is Gregg Barnes whom he met in New York during an awards night.

The opportunity to study abroad fell on Ong’s lap as early as four years ago. Because of a previous commitment, he couldn’t just go. He was doing costumes for Philippine stage stalwarts Joy Virata, Menchu Lauchengco-Yulo, Jaime del Mundo, Ana Abad Santos and other noted theater artists.

“A war was going inside me then. I could not just disappear and renege on my commitment. I felt it was not yet the right time to go. In my mind, I kept saying: “If it’s for me, it will happen. If it’s for me, the offer will come back.” 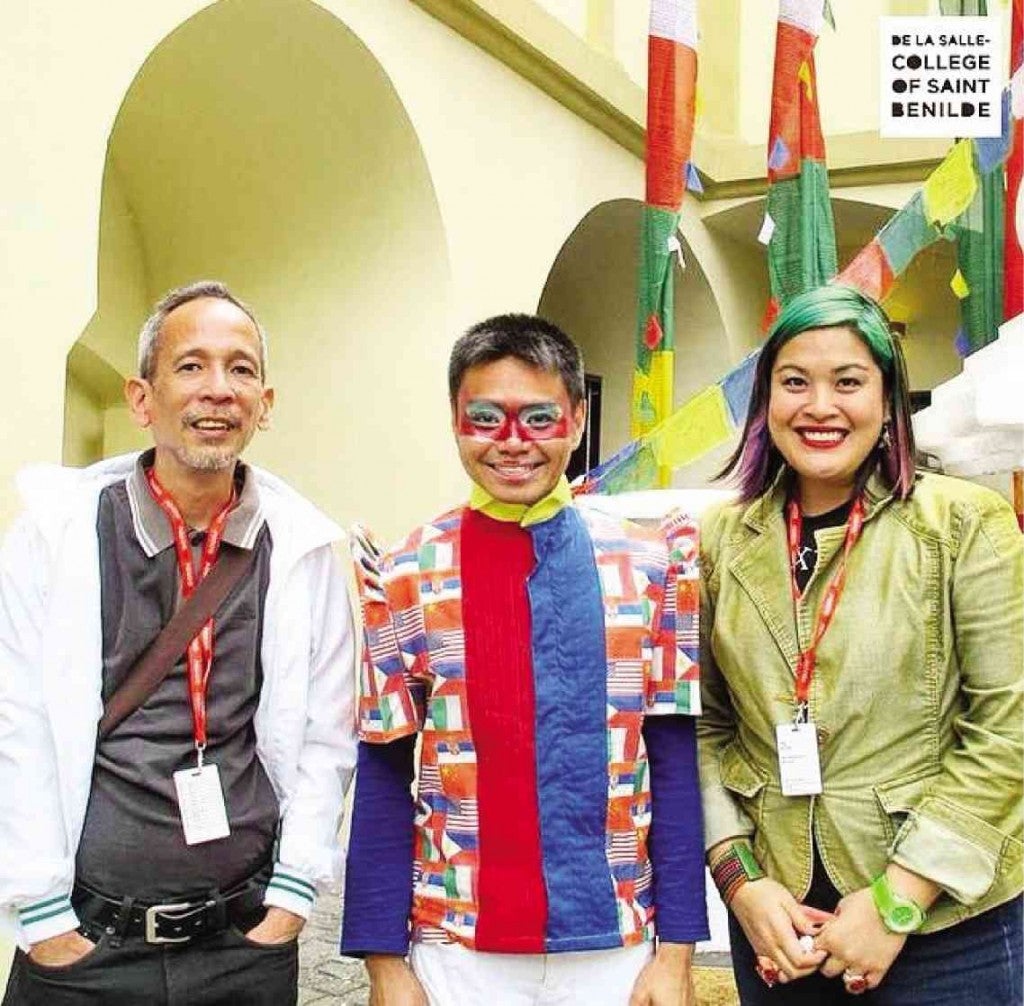 ART FOR THE WORLD With fellow designers from De La Salle-College of St. Benilde, Gabby Fernandez (left) and Magda de Leon at the main show of “Section of Countries and Regions” in Prague, Czech Republic.

The following year, 2012, UConn’s costume design department head Laura Crow wrote him asking if he was still interested. Ong froze. The opportunity came back, and he told himself: “This was really meant for me!”

Ong consulted many of his friends, among them his designer mentor, Eric Pineda. After patiently waiting for another year (somebody was next in line for the same position) and all of his friends said “yes,” he left the Philippines in 2014 for a new beginning.

In one his classes, Ong met Broadway costume designer Ann Houldward and listened to her inspiring thoughts about being a costume designer. “She told us: Design is a gift, give it only to people who are willing to receive it, be gracious because theater is about life,” he says.

A good design for Ong is something produced out of a great collaboration.

Ong always wanted versatility in his work. As the job requires a variety of themes, he believes that one must savor the emotional creative journey with each production he is tasked to do.

“Nothing is stagnant here. Your mind just keeps on being creative and productive,” he says.

As a production designer, he lives by his mantra: Be always trustworthy and dependable. “A director can never have a scenic designer, a costume designer, a lighting designer or a choreographer that he or she does not trust. Designing for the theater is all about trust,” he says.

“We are the backbone of the director. We translate words into visuals. We have this huge responsibility not only to provide the needs of the production but also to make sure that we attain our vision in terms of storytelling,” he stresses.

Right now, Ong feels being in “Wonderland” because his mind and eyes have been opened to a lot bigger things.

These include scenic design, lighting and concept development, working an average of 13 hours in the costume shop every week, building costumes and constructing all that is needed for the university’s season shows.

His routine also includes going to New York for fabric shopping, watching Broadway and off Broadway shows. As his department has a connection with Metropolitan Opera, he gets to watch operas as well for free.

His words of wisdom for future design students: “You can’t be a designer just because you want to. You become a designer because you love it. Theater is all about learning, and that is the best part of it.”