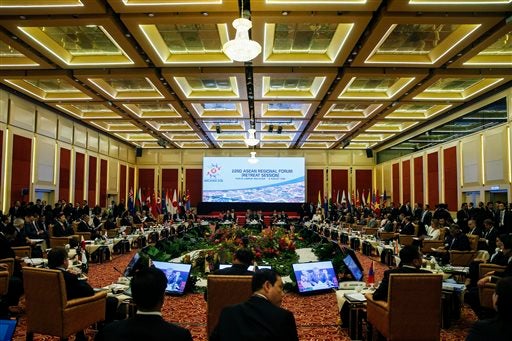 KUALA LUMPUR–Land reclamation works in the South China Sea have “increased tensions” in the region, Southeast Asian foreign ministers said Thursday, as they closed a meeting in which concern over Beijing’s island-building dominated discussions.

The long-simmering dispute has flared at the meeting, which as well as representatives from Asean nations such as Vietnam, the Philippines and Malaysia included envoys from more than a dozen other countries such as China, Japan, South Korea and the US.

Diplomatic sources said the two-day wait for the final communique was caused by wrangling among the delegations over how hard to push China over the issue.

They said the Philippines and Vietnam, in particular, were pushing for stronger language on Chinese land reclamation, which could help shore up Beijing’s disputed territorial claims.

But there was pushback from traditional China allies within Asean, they added.

“We discussed extensively the matters relating to the South China Sea and remained seriously concerned over recent and ongoing developments in the area.”

The statement, a joint communique emerging from a Tuesday meeting of the 10-nation Association of Southeast Asian Nations (ASEAN), was to be publicly released later, organizers said.

China has sparked alarm by expanding tiny reefs and constructing military posts, steps viewed by some of its neighbors as violating a regional pledge against provocative actions in the area.

The to-and-fro over how to respond to China is a recurring feature at meetings of Asean, several of whose members are wary of Beijing’s growing profile in the region, yet eager to maintain smooth relations with the world’s second-largest economy.