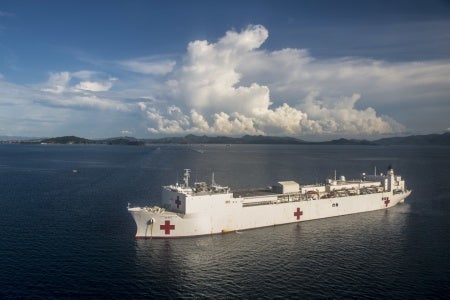 A multinational team of Operation Smile volunteer cleft care professionals from 13 countries is in Subic Bay Freeport to hold five days of free cleft lip and cleft palate repair surgeries for Filipinos. The new procedures will be held aboard the giant US Navy hospital ship USNS Mercy.

The 894-foot long USNS Mercy, which has 12 operating rooms and 1,000 patient beds, is visiting countries in Asia, conducting joint humanitarian activities and search, rescue and disaster preparedness drills with the host nations and private civic groups operating in the region like Operation Smile under the US Navy’s annual Pacific Partnership Program.

Operation Smile chief operating officer Wayne Zinn, a former US Marine who did a tour at the then Subic Naval Base from 1979 to 1980s, will join up with the cleft care team until Aug. 12.

“Subic is our seventh international mission site this year and this shows just how serious we are at harnessing Operation Smile’s global resources to help eradicate the backlog of cleft cases in the Philippines and ensure that moving forward we can treat new cases before children turn one year old,” Zinn said.

The Subic mission is the last leg of a two-city surgical mission that Operation Smile is doing under the US Navy’s Pacific Partnership program.

The first leg was held two weeks ago, from July 15 to July 20, in Roxas City where another multinational volunteer team boarded the USNS Mercy and treated 42 young patients afflicted with oral cleft.

On Feb. 14 to 22, Operation Smile had its first international mission for 2015 in Cauayan, Isabela, where 127 cleft patients received free surgery.

The Philippines has a high prevalence of cleft births. Every year, an estimated one in every 500 live births or 5,000 babies are born with the deformity.