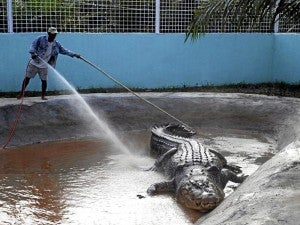 GOING FOR GUINNESS. Guinness and National Geographic Representatives are coming to Agusan del Sur to determine whether “Lolong” is the largest salt water crocodile in captivity. INQUIRER FILE PHOTO

BUNAWAN, Philippines – Representatives from the Guinness Book of World Records are expected to arrive here before the end of the month to verify if Lolong is indeed the world’s largest saltwater crocodile in captivity, Mayor Edwin Elorde said.

Also arriving to study Lolong are staffers of National Geographic based in New Zealand, he said.

He said Guinness had formally informed him of the arrival of its representatives. “All they want is proof that the current record has been broken,” Elorde said.

Lolong is said to be 6.4 meters long and weighs more than a ton.

According to National Geographic, the largest crocodile on record belonged to the prehistoric species Sarcosuchus imperator, which lived around 110 million years ago.

Recent fossilized remains found in the Sahara Desert suggest that the creature took around 50-60 years to grow to its full length of around 11-12 meters (37-40 feet) with a maximum weight of around eight tons.

Meanwhile, Lolong still refuses to eat, two weeks since his capture on Sept. 3, according to Elorde. “He looks healthy, maybe he’s just still stressed out.”