WASHINGTON, D.C. – Taking time off from the Ambassador’s Tour in which he was among the approximately 200 participants, Richmond-based Rumy Mohta on July 9 searched Cebu City for a Filipino student whose photo showing him studying outside a fast food establishment went viral.

The photo showed the boy sitting outside the restaurant’s window so he could use its light to do his homework. He was later identified as Daniel Cabrera. 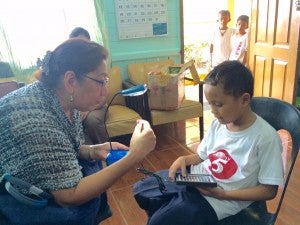 Marj Mohta explaining to Daniel Cabrera how to use the solar study lamp.

Rumy is married to Filipina American Marj Mohta and is principal director of Thrive Solar Energy Philippines (TSEP), a leading manufacturer and distributor in the Philippines of lighting systems and solar power packs. The couple was in Cebu as part of the 10th Ambassador’s, Consuls General and Tourism Directors Tour (ACGTDT).

The ACGTDT is the flagship tourism project of the Philippine Embassy and the Consulates General in the U.S. An annual activity since 2005, the Tour has also become a venue for Filipinos and Americans to explore trade and investment opportunities in the Philippines. After the basic program, participants who wish to see more of the country have several post-tour options to choose from. 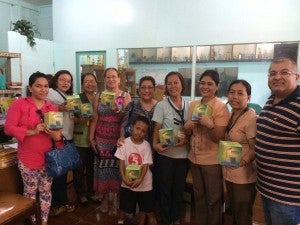 Rumy Mohta, far right, with Daniel Cabrera’s teachers and principal at his school.

“Our stay in Cebu was extended due to bad weather. It turned out to be a blessing as Marj and I visited Daniel Cabrera at his school and donated Solar Study Lamps from #ThriveSolarEnergyPhilippines for him and other similar kids in his school. His principal, Mrs. Alma Bardoquillo, and his teachers were very appreciative of our donations. This was one of the highlights of my trip to Cebu, a great and warm city with beautiful people,” Rumy said.

Philippine Ambassador to the United States Jose L. Cuisia, Jr. thanked the Mohtas for the gesture.

“I sincerely thank Rumy for his thoughtfulness and generosity. I am certain that his gift of solar study lamps has inspired Daniel and the other children to continue working hard on their studies,” Cuisia remarked.