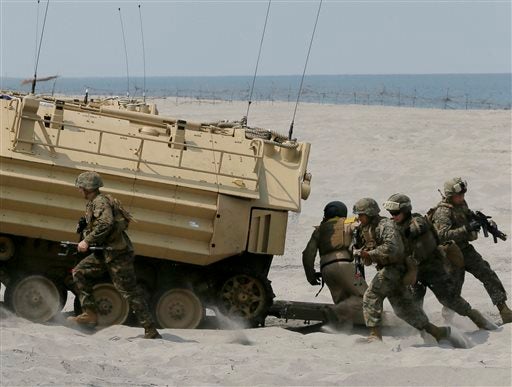 DAVAO CITY—“America would never die for us,” Mayor Rodrigo Duterte told visiting military attachés, including those from the United States and China, during a discussion of the South China Sea territorial dispute here on Thursday.

“If America cared, it would have sent its aircraft carriers and missile frigates the moment China started reclaiming land in contested territory, but no such thing happened,” said Duterte, a potential presidential candidate in next year’s general elections.

In challenging China’s claim over almost the entire South China Sea, the Philippines, he said, is just defending its rights to fish and explore for resources in the West Philippine Sea, part of the contested waters within the country’s 370-kilometer exclusive economic zone (EEZ).

He said the fishing grounds in the West Philippine Sea had been important sources of food for Filipino fishermen until China blockaded them.

“Why can’t you leave us alone, allow us to fish in the area, which we’ve been doing for centuries. Those are important sources of food for us. Are you going to kill us with hunger?” Duterte said, addressing himself to the Chinese military attaché.

“Don’t oppress us, you’re already a rich country while lots of our people are poor. We’re not going to make war. Will you allow us to die of hunger?” he said.

Duterte spoke at a closed-door meeting of military attachés from 20 countries at The Marco Polo Hotel that discussed regional security and the territorial disputes between China and five smaller neighbors in the region.

Besides the Philippines, Brunei, Malaysia Vietnam and Taiwan have territorial claims in the South China Sea that overlap with China’s.

Speaking to reporters after the meeting, Duterte did not say how the US and Chinese military attachés reacted to his speech.

The Philippines has signed a new defense agreement with the United States, the Enhanced Defense Cooperation Agreement (Edca), to allow US troops greater access to and position weapons in Philippine military bases.

The Edca is seen as a vital cog in the United States’ “pivot” to the Asia-Pacific region, under which Washington is shifting 60 percent of its warships to Asia in a move understood as containing the military rise of China.

Signed in time for US President Barack Obama’s visit to Manila last year, the Edca has not been implemented because critics have challenged its constitutionality in the Supreme Court.

During his visit, Obama gave no categorical commitment that the 62-year-old Mutual Defense Treaty between the United States and the Philippines, the basis for Edca, would apply should the territorial dispute between the Philippines and China escalated into war.

The United States, however, has stepped up surveillance in the South China Sea, sending spy aircraft over areas where China is building artificial islands at reefs claimed by the Philippines.

Washington officials have spoken about sending warships within 22 km of the artificial islands to test China’s claim to nearly all of the 3.5-million-square-kilometer South China Sea.

No such probe has taken place, though.

American officials have made it clear that the territorial disputes in the South China Sea will not hinder nascent military and economic cooperation between the United States and China.

Adm. Harry Harris, the new chief of US forces in the Pacific, has said that “conflict is bad for business.”

American officials say Washington takes no sides in the territorial disputes, but maintain that the United States has a “national interest” in freedom of navigation in the South China Sea.

The Philippines has sued China in a United Nations arbitral court and is trying to win support from other countries. It is also trying to win solid backing from the Association of Southeast Asian Nations (Asean) and, together with Vietnam, is pushing for a binding “code of conduct” to prevent the territorial disputes from erupting into armed conflict.

A Philippine military official said on Sunday that Asean countries should stand united against China’s land reclamation in the South China Sea.

Col. Restituto Padilla, spokesman for the Armed Forces of the Philippines, said all nations should speak out on the Chinese land reclamation.

“All nations ought to speak out as well so that hopefully with that one voice, China will listen and not use might against right, and will go by a rules-based approach that all peace loving nations conform to,” he said.

Padilla issued the statement in reaction to a New York Times article, in which various think tanks raised concern over China’s activities in the South China Sea.

He pointed out that the Philippines had raised arguments similar to what the article raised.

He said China might listen if Southeast Asian countries with claims in the South China Sea raised their concerns as one voice.–With reports from Julie M. Aurelio and Inquirer Research