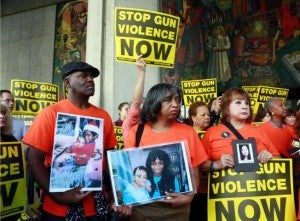 Parents of victims of gun violence, pastor Ruett Foster, from left, his wife Rhonda and Anna Del Rio hold pictures of their late children, during a rally supporting a city ordinance to ban the possession of high-capacity gun magazines outside Los Angeles City Hall, Tuesday, July 28, 2015. The Los Angeles City Council has voted to ban possession of high-capacity gun magazines in the wake of several deadly mass shootings around the country. AP PHOTO/NICK UT

LOS ANGELES — The United States’ second-largest city is poised to ban possession of firearm magazines that hold more than 10 rounds of ammunition, stepping into the national debate over gun regulation following a series of deadly, mass shootings.

California is one of a handful of states that give local government considerable latitude to enact gun regulation. The Los Angeles City Council voted unanimously Tuesday to close a loophole in state law that bans the manufacture and sale of large-capacity magazines, but not their possession.

“As national and state leaders struggle with a way to move forward with much needed gun laws, I applaud our city leaders for taking decisive action today that will help us save lives and prevent crime,” said Mayor Eric Garcetti, who plans to sign it.

The practical effect of the law is unclear. It’s not known how many city residents own high-capacity magazines or, once the law goes into effect, will take them out of Los Angeles, sell them to a licensed dealer or surrender them to police during a 60-day grace period. The magazines can be sold under certain circumstances under state law, which generally bans their sale.

While a small step, supporters said its passage would send a symbolic message at a time when the political divide on Capitol Hill has stalled efforts to enact firearms controls following mass shootings in which large-capacity magazines were involved.

The Los Angeles ordinance mirrors measures in San Francisco and Sunnyvale, and New York state passed a similar law in 2013.

“We are seeing more and more cities in California taking action on gun violence when the federal government has been unable to do anything,” said Mike McLively, a staff lawyer with the Law Center to Prevent Gun Violence.

“I do think this law has a strong symbolic value. The city of Los Angeles is saying, ‘Enough is enough, we are going to take a stand.'”

The ordinance could face a legal challenge, and critics argue it’s essentially a toothless measure since neighboring cities do not have similar bans. Violations would be a misdemeanor.

Anna M. Barvir, an attorney whose firm represents the National Rifle Association and the California Rifle & Pistol Association, said in a statement that flatly banning the larger magazines violates the Constitution and conflicts with state law.

“Magazines over 10 rounds are in common use for self-defense,” she said. “They are constitutionally protected.”

The ordinance listed a string of fatal shootings in which gunmen used larger magazines, including Jared Loughner, who killed six people and wounded 13, including former U.S. Rep. Gabby Giffords, in Tucson in 2011.

Once enacted, police will no longer have to deal with a murky legal area in which anyone who owned a large-capacity magazine prior to the state ban on manufacture and sale could legally keep it, said Councilman Paul Krekorian.

American has seen “so much violence, so many deaths, so many mass shootings, we’ve almost become inured to the impact of it,” Krekorian said.

With Washington gridlocked, “If they won’t act, we will,” he said.