Booms mysteriously pop up on waters off Zambales 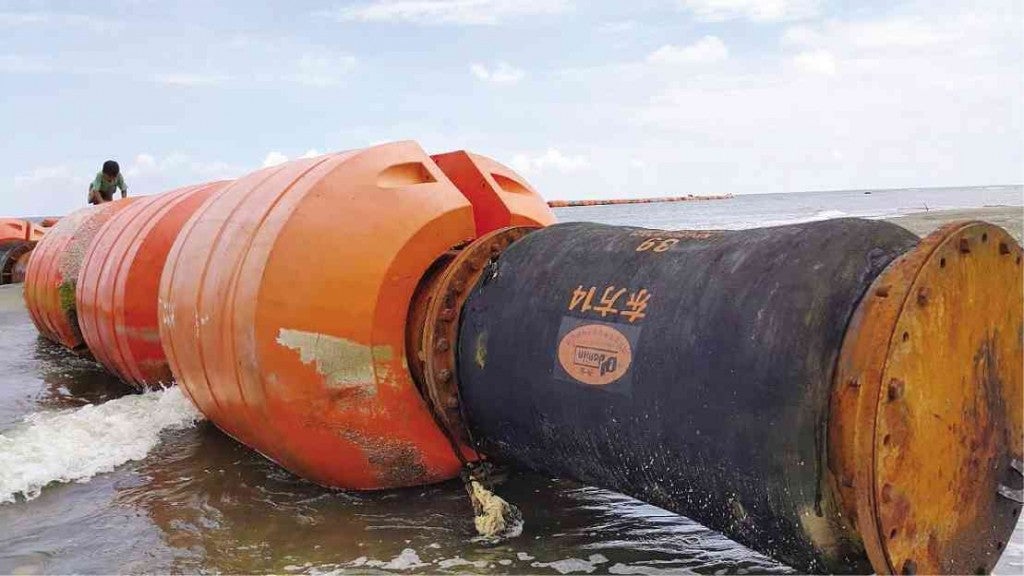 SUBIC, Zambales—Officials of Zambales were baffled by the recent discovery of floating booms with Chinese markings in waters not far from the disputed Panatag Shoal, and said they would launch an investigation to determine where these came from.

Fishermen here first saw the orange containment booms, about a kilometer long, on Friday, 5.5 km (3 nautical miles) from the shore of Cabangan town and alerted provincial officials and the Philippine Coast Guard (PCG).

The booms, usually used as temporary barriers to contain an oil spill, were towed to the provincial capital Iba.

Vice Gov. Ramon Lacbain III said the origin of the booms “remained uncertain” and the agencies concerned must verify why they were in the province’s waters.

“Although there were Chinese markings on the booms, it is too early to say they came from Scarborough Shoal or from China,” Lacbain told the Inquirer in a telephone interview on Sunday.

“The floating booms must be investigated. We have to know where these came from and why they were floating within the province’s waters,” Lacbain said.

He said the provincial board may tackle the discovery in a session only after an investigation had been conducted by the PCG and the Bureau of Fisheries and Aquatic Resources (BFAR).

Chief Petty Officer Lino Torres, station commander of the PCG substation in Masinloc, said fishermen in Cabangan found the booms at 2 p.m. on Friday. “They alerted the provincial office of the BFAR about their discovery and we organized a team to pull the floating booms to shore,” he said.

On nine fishing boats, the fishermen and PCG and BFAR personnel towed the booms to Barangay (village) San Agustin in Iba on Saturday morning.

“It took us a day to tow the booms to shore because they were so heavy,” Torres said.

“We’re just guessing the booms came from Scarborough Shoal or are owned by China because of the Chinese markings,” Torres said.

He said they were waiting for a directive from PCG headquarters on what to do with the booms.

In late May, Reuters reported that the Philippine Navy had found buoys in the disputed Reed Bank, where Manila has awarded a contract to an Anglo-Filipino consortium to explore for oil and gas.

A steel marker was gone but other buoys remained when the navy returned in mid-June.

Drilling at Reed Bank was suspended early this year due to an ongoing arbitration case in The Hague.

He said it was “a disturbing development given that the booms were supposedly found well within” the country’s exclusive economic zone.