Sri Lanka urged not to give Philippines elephant 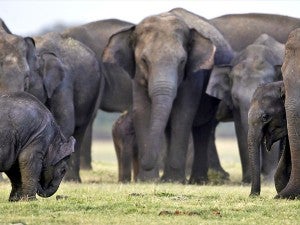 A herd of Asiatic wild elephants gathers at a national park in Minneriya, some 200 kilometers from Colombo, Sri Lanka. AP

COLOMBO, Sri Lanka—An international animal rights group on Friday urged Sri Lanka to halt its plan to donate a baby elephant to the Philippines, saying the zoo where it would live is decrepit and doesn’t have enough space for such animals.

Officials at the Manila Zoo, where the elephant is being sent, rejected the criticism, saying the facility has taken good care of another elephant from Sri Lanka since 1980.

Sri Lanka said Thursday it is donating the animal from a government-run elephant orphanage to mark 50 years of diplomatic relations between the two countries.

Manila-based People for the Ethical Treatment of Animals Asia sent a letter Friday to Sri Lankan Prime Minister D.M. Jayaratne, saying that sending an elephant to the Manila Zoo would “surely reflect poorly on Sri Lanka.”

“If you care about elephants, you would never send one to the Manila Zoo to suffer for the rest of their life,” the group wrote in the letter.

The group said the zoo’s barren cement enclosure for its current elephant, named Mali, is about 72 square yards (60 square meters) and doesn’t allow her enough “stimulation, room to explore, and everything else that is natural and important to her.”

Ironically, PETA Asia also said that Mali is “cruelly denied socialization” at the Manila Zoo, though the group nonetheless objects to sending another elephant to join her.

The new elephant would be temporarily kept in a separate enclosure before being introduced gradually to Mali, said Agerico Sebastian, assistant director of the zoological division of the Manila Zoo, who added that he had no confirmation yet of the elephant’s arrival.

Sebastian denied the group’s allegation that the zoo was decrepit and said the elephant’s enclosure was larger than PETA Asia’s estimate, though he did not give a figure.

“We have given it sufficient nutrition, compared to what it would have in the wild, in the forest,” he said. “It would not have lived this long if we did not take care of it.”

Jayaratne’s office had no immediate comment about the letter.