Former Sen. Joker Arroyo on Friday said there should be no concern over the allegedly huge government delegation to the UN Permanent Court of Arbitration in The Hague for the just-ended oral arguments on the country’s case against China, saying the Philippines “cannot scrimp when the stakes are high.”

“Nor the supposedly high cost of sending (the 30-plus officials from the executive, legislative and judicial branches of government) there,” Arroyo asserted.

However, the former lawmaker told the Inquirer “what we overlook is that the nation has retained expensive foreign lawyers to argue the Philippine position.”

“Are we saying that we are bereft of dependable Filipino lawyers learned in the very specialized field of international law?,” he asked.

He said that Filipinos “cannot concede this. Public discussion on the Chinese controversy by Filipino experts have abundantly shown their excellent credentials and expertise.”

Arroyo, himself a lawyer whose rise to national consciousness started during the Marcos regime when he challenged before the Supreme Court the constitutionality of Proclamation 1081 imposing martial law, wondered “70 years after independence, we cannot handle our country’s legal defense?”

“Yet, we are a very litigious people. We can TRO even a consummated and operating contract,” he pointed out.

According to the former Senate blue ribbon committee chair, “if the government does not feel secure with Philippine lawyers handling the country’s interest in international tribunals, an attitude unfortunately nurtured not only by the present administration but by the past administrations, as well, then hire foreign lawyers.”

However, he said it should be “consistent with national self-respect.” 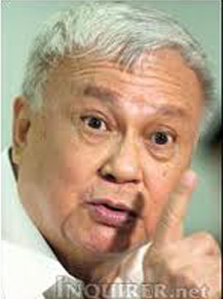 Arroyo, whose brilliant skills as a trial lawyer were demonstrated when he helped defend political detainees like the late Sen. Benigno “Noynoy” Aquino, father of President Aquino, and former Senate President Jovito Salonga, among others, observed that “the pictures taken by Deputy Presidential spokesperson Abigail Valte and relayed to Philippine media (including the Inquirer) make us look so puny.”

“Seated in the front row during the initial hearing were Solicitor General Florin Hilbay and Foreign Secretary Albert del Rosario alongside four foreign lawyers,” he said.

For appearance sake, he believes “it did not look good at all. It is as if we have no qualified international law barristers to articulate our position.”

“Yet, Secretary Del Rosario delivered a very enlightening opening statement for the Philippine side,” said Arroyo, who served as Executive Secretary during the administration of the late President Corazon Aquino.

He noted that “excerpts of the proceedings forwarded by Ms Valte showed that our foreign lawyers did not express new arguments that were not expounded already by Philippine lawyers on the subject, such as the series of scholarly lectures by (Supreme Court Senior) Justice Antonio Carpio, among others.”

Presidential spokesperson Edwin Lacierda had defended the hiring of the foreign lawyers, saying “these are lawyers who have an international reputation appearing before the tribunal.”

Paul Reichler, the US lawyer leading the Philippine team in its fierce legal battle against China, reportedly belongs to a select group of lawyers with extensive experience in representing sovereign states before the International Tribunal on the Law of the Sea (Itlos) in Hamburg, Germany.

Reichler of the Boston-based law firm Foley Hoag has specialized for over 25 years in land and maritime boundary disputes. He works with four other lawyers from the US and the United Kingdom in arguing the country’s case before the UN arbitral tribunal.