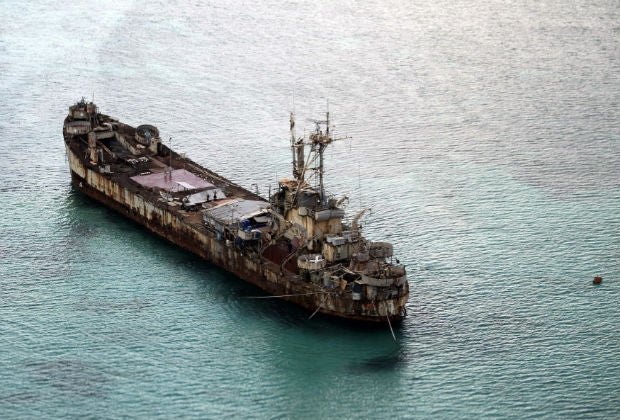 This aerial photo taken through a glass window of a military plane shows the dilapidated Sierra Madre ship of the Philippine Navy anchored near Ayungin Shoal with Filipino soldiers onboard to secure perimeter in the Spratly Islands in the South China Sea Monday, May 11, 2015. AP FILE PHOTO

BEIJING—Beijing has hit out at Manila for repairing a crumbling ship serving as its outpost in the West Philippine Sea, branding the Philippines as a “hypocritical troublemaker and rule breaker.”

The comments come as Beijing pursues a rapid program of artificial island construction in the West Philippine Sea, facilities that it has said would serve military as well as civilian purposes.

The Philippine military deliberately grounded the 100-meter World War II-vintage BRP Sierra Madre atop Ayungin (Second Thomas) Shoal in 1999 in an effort to check the advance of China, which four years earlier occupied Philippine-claimed Panganiban (Mischief) Reef some 40 kilometers away.

Col. Edgard Arevalo, Philippine Navy spokesman, said on Wednesday that the rust-ridden vessel was being repaired to ensure the ship remains livable for a tiny unit of Marines guarding the reefs.

The move drew a vehement protest from Beijing, with foreign ministry spokesperson Hua Chunying accusing Manila of attempting to “permanently steal” the outcrops, while insisting that the reefs and other islets in the Spratlys were Chinese territory.

“China strongly protests and firmly opposes such an act,” Hua said in a statement on Wednesday.

She also argued that Manila had gone back on its word by repeatedly promising to remove the ship, a claim the Philippines denies.

“The relevant activity fully exposed the Philippines’ hypocrisy and that it is a double-dealer,” Hua said. “It once again proved that the Philippines is truly a troublemaker and rule breaker in the region.”

At the same time, the Philippines has asked a United Nations-backed tribunal to declare China’s claim over the West Philippine Sea and most of the resource-rich South China Sea illegal.

The arbitration body based in The Hague is expected to decide within months whether it has jurisdiction over the case.

The Philippines regularly rotates a group of around nine Marines aboard the Sierra Madre, a tank-landing ship that first saw service for the US Navy in World War II. It was acquired by the Philippine Navy in the 1970s.

Hua said China was “determined to protect its territorial sovereignty and maritime rights and interests.”

“We again urge the Philippines to immediately stop its illegal infringement activities and live up to its promise by removing the vessel,” she said, adding that Beijing “reserves the right to take further steps.”