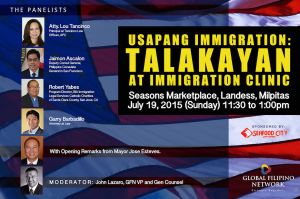 “Usapang Immigration,” a program launched in February 2015 under the Global Filipino Network(GFN)’s community development track, reaches out to the Filipino community to educate them on issues and policies.

This month’s forum is co-organized by GFN and Tancinco Law Offices  with support from other participating groups which include the SF Philippine Consulate, Catholic Charities of Santa Clara County and the City of Milpitas.

The venue is sponsored by Seafood City Supermarket.

Among the topics to be discussed by the panelists include President Obama’s executive action on immigration and how it affects the community.

This panel discussion  will  be followed by an immigration clinic where attendees receive free advice from the panelists pertaining to their own immigration issues.

The list of guest speakers for this month’s forum includes:

The date for this month’s event coincides with the “Consulate-on-Wheels,” which is also to be held at Season’s Marketplace. COW is a regular outreach program organized by the SF Philippine Consulate general in partnership with Seafood City to bring the various consular services closer to the community.

“Usapang Immigration: Talakayan at Immigration Clinic” will be held on Sunday, July 19, 2015, 11:30am-1pm at Season’s Marketplace, 1535 Landess Ave, Milpitas. The event is FREE and open to the public.

Read Next
St. James the Apostle Church festival in Fremont
EDITORS' PICK
LTO’s P500-M deal for screws draws scrutiny
Smart reinforces superiority with best speed and mobile video experience in PH
Every Filipino home can now be a smart home with realme TechLife
Nestlé Philippines’ ‘NESCAFÉ Plan’ bags Grand Anvil at PRSP 56th Anvil Awards
New 3,045 COVID-19 cases push PH total active cases to 40,074
How to lose a PH genius: Wesley So officially a US citizen
MOST READ
Robredo on Sara Duterte leading poll surveys: Why are Filipinos drawn to leadership of this kind?
How to lose a Filipino genius: Wesley So officially a US citizen
Hugpong Ng Pagbabago fully supports Sara Duterte says confidant Davao del Norte governor
Duterte on his ‘faults’: ’I just have cases of extrajudicial killings’
Don't miss out on the latest news and information.