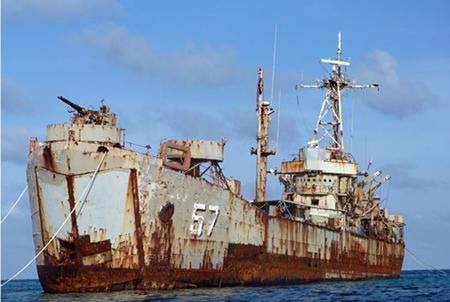 The Philippines said Wednesday it was repairing a crumbling ship serving as its lonely outpost in the disputed South China Sea as China deploys more vessels and builds new islands nearby.

“Maintenance repair is being done to ensure the vessel’s minimum habitability. We are morally and duty-bound to provide for our troops there,” he told Agence France-Presse.

The Philippine military deliberately grounded the 100-meter (328-foot) vessel atop the reefs in 1999 in a last-ditch effort to check the advance of China, which four years earlier occupied Philippine-claimed Mischief Reef some 40 kilometers (25 miles) away.

The Philippines regularly rotates a group of around nine marines aboard the tank landing ship, which first saw service for the United States navy in World War II. It was acquired by the Philippine Navy in the 1970s.

In recent months the Philippine military has accused China of employing its maritime surveillance ships to harass the former’s resupply missions to the Sierra Madre.

In an incident witnessed by Filipino journalists, a Chinese coast guard ship attempted to block a Philippine vessel that was to bring fresh supplies to Filipino troops on the Sierra Madre in March last year.

Arevalo said the repairs were not a response to China’s island-building.

“We do not look at the deployment of the ship as addressing that issue,” he said.

“The decrepit condition of the ship is no secret. Such (a) sorry state has gained notoriety when it was reported by international print media,” he added.

Arevalo said he could not confirm reports of a plan by the military to build a helipad on the ship.

The Philippines has asked a United Nations-backed tribunal to declare China’s claim over most of the resource-rich South China Sea as illegal.

The arbitration body based in The Hague is expected to decide within months whether it has jurisdiction over the case after hearing arguments from Filipino officials in the past week.

China has refused to participate in the arbitration.

Arevalo said the Filipino troops on the Sierra Madre were “in high spirits”.

“Their morale remains high. They are aware of the punishing conditions in that distant assignment,” he said.

“They know they have a mission to perform.”