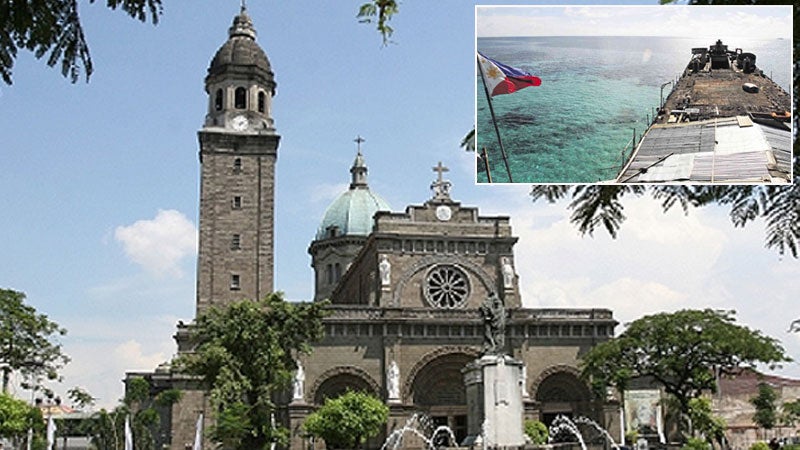 The Manila Cathedral. Filipino bishops called on the nation Monday, July 13, 2015, to storm the heavens with prayers for the protection of the Philippines and a peaceful resolution of the country’s territorial dispute with China in the West Philippine Sea. INQUIRER file photos

Filipino bishops called on the nation Monday to storm the heavens with prayers for the protection of the Philippines and a peaceful resolution of the country’s territorial dispute with China in the West Philippine Sea.

The Catholic Bishops’ Conference of the Philippines (CBCP) ordered an Oratio Imperata as lawyers for the Philippines answered questions from judges on a United Nations arbitral court in The Hague on a suit brought by the Philippines to resolve the dispute according to international law.

Lingayen-Dagupan Archbishop Socrates Villegas, president of the CBCP, said the only thing ordinary Filipinos could do collectively amid rising tension in the West Philippine Sea was to pray and seek God’s intervention.

“We will have an Oratio Imperata, which is an obligatory prayer for all Catholics in all the dioceses to be prayed so that the tension may ease, and justice, equality and prosperity may be served,” Villegas said during a press briefing at the end of the three-day plenary assembly of the CBCP yesterday.

Oratio Imperata is an ordered prayer for a special intention besides the ones prescribed by ritual that the Pope or the bishop of a diocese may require to be said during Mass.

There are different kinds of Oratio Imperata, said either for civil disturbances or deliverance from calamities or illnesses.

He said the CBCP had the right to be concerned about the territorial dispute because if it escalated, it would become “a problem of peace … and peace is the mission of the Church.”

In an interview later with reporters, Villegas said the Catholic faithful could neither go to The Hague nor patrol the West Philippine Sea, but they could kneel and pray for God’s help.

“We know that the tension there will not be solved through people alone but through God’s grace,” Villegas said.

The Oratio Imperata will be recited during Masses in all the dioceses across the country, Villegas said.

He said the bishops would decide when to start and end the holding of the special prayer.

The Oratio Imperata will call for peace on the disputed islands in the West Philippine Sea and for the resolution of the dispute through justice and respect for the Filipino people’s rights.

“We pray that no harm will be done to our marine creatures and habitat. We pray that our fellow Filipinos protecting our islands and seas be kept safe from natural and man-made disasters,” the prayer goes.

The prayer will also be dedicated to government officials “that they resolve this crisis with courage and in the spirit of dialogue,” Villegas said.

Informed about the Oratio Imperata, the Department of Foreign Affairs (DFA) said the people’s prayers would help the country in its fight against China’s intrusions into the West Philippine Sea.

He said the government was doing everything to resolve the dispute peacefully and prayers would be a big help.

Lawyers for the Philippines faced the arbitral tribunal on Monday for a second round of oral arguments, answering clarificatory questions from the judges on the Philippine stand that the court had jurisdiction over the case.

The court first has to decide whether it has jurisdiction over the case, then, if it decides for jurisdiction, call for oral arguments on the merits of the Philippine suit.

Law of the sea

In the first round of arguments last week, the Philippine legal team told the court that it had jurisdiction because the case involved China’s violation of the United Nations Convention on the Law of the Sea (Unclos).

The Philippines is challenging China’s claim to islands and reefs in the West Philippine Sea, part of the South China Sea within Manila’s 370-kilometer exclusive economic zone (EEZ) recognized under the Unclos.

China insists it owns those islands and reefs because it has “undisputed sovereignty” over 90 percent of the 3.5-million-square-kilometer South China Sea.

Beijing has refused to participate in the arbitration, and has gone ahead with building artificial islands at the Philippine-claimed reefs. It is believed to hand the UN court a fait accompli in the event of a ruling for the Philippines.

Besides the Philippines, Brunei, Malaysia, Vietnam and Taiwan also claim parts of the South China and are following closely the progress of the Philippine case.

Jose said Paul Reichler, one of the Philippines’ foreign lawyers, expected a ruling on jurisdiction to come down in 90 days.

In Malacañang, presidential spokesman Edwin Lacierda said the government was confident the arbitral court would rule in favor of the Philippines.

Jose said the DFA supported calls from netizens for Google to replace with neutral names the Chinese names of the disputed islands in the South China Sea.

“That would be good,” Jose said.

He added, however, that the DFA still had to decide whether it would actually ask Google to rename the disputed islands.–With reports from Christine O. Avendaño and Jerry E. Esplanada

Bishops against asking help from US in shoal dispute