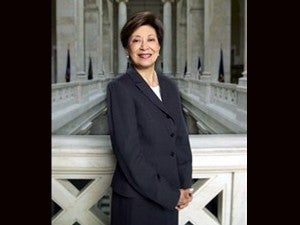 Haley, who had been executive director of the Arkansas Economic Development Commission, died of a brain aneurysm.

Haley worked for Clinton when he was Arkansas governor and later when he was president—originally in the presidential personnel office and then, from 1994 to 1999, on the board of the Export-Import Bank of the United States.

Clinton described Haley as a world citizen, saying people in the United States and the Philippines benefitted from her “life-long commitment to bring economic opportunities to more people.”

“Maria Haley was a great public servant, a wonderful person, and my friend for more than 30 years,” Clinton said in a statement.

“When I was governor of Arkansas, Maria was invaluable in opening foreign markets to our products, recruiting foreign investment in our state, and supporting my work in the National Governors Association,” he said.

Before and after her time at the Export Import Bank, Haley served as Special Assistant to the President and as Deputy Director of the Presidential Personnel Office, helping other qualified and dedicated people serve in important positions, he said.

“Maria was really a world citizen, who never lost contact with her native nation, the Philippines, where she served as an adviser to President Gloria Arroyo,” said Clinton.

Haley was born in the Philippines, and educated in India, Pakistan, France and Spain. In 2001 and 2002, she served as an advisor to then president Gloria Macapagal-Arroyo on wide ranging topics such as money laundering, government transparency, Philippine American issues, and the political and religious ramification of the September 11th tragedy.

“Thousands of people in Arkansas, throughout the United States, and in the Philippines, benefited from Maria Haley’s life-long commitment to bring economic opportunities to more people,” he said.

“As we mourn her passing, we also must be very grateful for her life,” said Clinton.