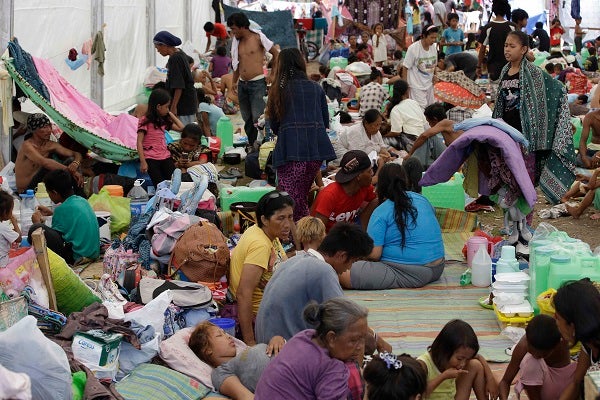 Villagers, who were displaced by the fighting between government forces and Muslim rebels in Zamboanga City, continue to be housed in tents in a stadium Friday, Sept. 20, 2013. AP PHOTO/BULLIT MARQUEZ

COTABATO CITY, Philippines – The United Nations is bringing in $470,000 (P20.6 million) worth of agriculture support to Muslim farmers affected over the years by armed conflict and natural calamities in Central Mindanao.

The country representative of the UN Food and Agriculture Organization (UN-FAO) said the aid was part of the $2.7 million five-year support program started in 2011 with the Autonomous Region in Muslim Mindanao (ARMM).

Following the signing, the UN-FAO will deliver rice, corn and vegetable seeds, as well as bags of fertilizer, and hand tools to 930 rice farmers and 2,710 corn tillers in 16 Maguindanao towns. A proportionate share had been allocated for 480 and 880 rice and corn farmers in Pikit town in nearby North Cotabato province.

Both officials considered the assistance package timely, as the region’s mainly agricultural economy was severely affected by massive community displacement due to armed conflict, and the recent dry-spell and floods that hit Maguindanao, ARMM’s top agriculture-producing province.

“The (UN-FAO) intervention is a follow through to a continuing commitment to help communities affected by the conflict in the Southern Philippines,” said Fernandez, who was accompanied here by FAO assistant representative Artiseo Portugal and senior staff Cesar Galvan.

The UN agency official foresaw “a more strengthened collaboration” under a Bangsamoro government being crafted in Congress, adding he hoped “to be back soon to see the light of dawn enjoyed by all.”