US lawyer for PH expert in maritime boundary cases 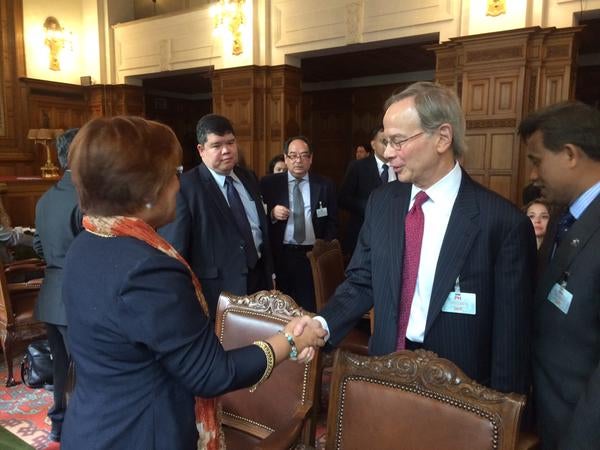 The lawyer leading the Philippine team in its fierce legal battle against China belongs to a select group of elite lawyers with extensive experience in representing sovereign states before the International Tribunal on the Law of the Sea (Itlos) in Hamburg, Germany, according to Chambers Global, which ranks law firms and lawyers across the world.

Paul Reichler of the Boston-based law firm Foley Hoag has specialized for more than 25 years in land and maritime boundary disputes, the law firm said on its website.

Reichler works with four other lawyers from the United States and the United Kingdom, in arguing the country’s case before the UN arbitral tribunal in The Hague, The Netherlands.

During the first two days of arguments, the legal team presented arguments as to why the five-member arbitral panel at the Permanent Court of Arbitration headquartered in The Hague had jurisdiction over the Philippines’ case.

READ: PH in The Hague: China violated int’l law / In The Hague: Like taking a crash course in int’l law, says De Lima / Why SC justices are in PH delegation at The Hague

The Philippines set the arbitration case in motion beginning 2013 in the hope of halting China’s aggressive incursions into the country’s 370-kilometer exclusive economic zone (EEZ).

“This is a very important case so we hired experts on international law with rich experience and proven track record,” Foreign Affairs Assistant Secretary and spokesperson Charles Jose said when asked why the government was hiring foreign lawyers to represent the country in The Hague.

At a press briefing this week, presidential spokesperson Edwin Lacierda said as much about Reichler and the members of his legal team.

“These are lawyers who have an international reputation appearing before the tribunal. We can rely on them. They’ve been with us from the start, since we filed the case,” Lacierda said.

More than expertise, however, Reichler is known for representing small countries against powerful ones, including his homeland, the United States.

In one of his celebrated cases, the American lawyer served as counsel to Nicaragua in its case at the International Court of Justice (ICJ), questioning the legality of the US military, logistical and financial aid to counterrevolutionary forces attempting to overthrow the Nicaraguan government, and the mining of Nicaraguan harbors by US military and intelligence forces.

In 1986, the ICJ ruled in favor of Nicaragua and ordered the US to pay reparations to the Nicaraguan government for causing damage to its people, property and economy.

In a more recent case similar to the Philippines’ claims against China, Reichler served as counsel to Mauritius, an island nation in the Indian Ocean, in an arbitration case against the United Kingdom.

Mauritius was locked in a dispute with the UK over the Chagos Archipelago in the Indian Ocean and the establishment of a marine protected area (MPA) in the British Indian Ocean Territory by the UK government.

The arbitral tribunal in its preliminary ruling rejected the British claim that it had no jurisdiction over the case, and ruled in favor of Mauritius in March this year.

The Philippines is also invoking Unclos to defend its right to exploit maritime resources within its EEZ and territorial sea and challenging China’s nine-dash-line claim that encompasses almost the entire South China Sea.

Lauro Baja, former senior official of the Department of Foreign Affairs and one of the diplomats who crafted the Declaration on the Conduct of Parties in the South China Sea in 2002, said in a text message that the Philippines should learn from the Mauritius v. UK case.

Reichler is assisted by Lawrence Martin, a fellow international lawyer at Foley Hoag, and three other international experts who had served as arbiters on various international courts. They are Philippe Sands, Alan Boyle and Bernard H. Oxman.

According to his profile on Foley Hoag’s website, Martin concentrates his practice on international disputes, typically involving foreign sovereign governments, their agencies and instrumentalities.

Sands, a British-French professor and lawyer at the London-based Matrix Chambers law firm, had served as arbitrator in several cases under the International Center for Settlement of Investment Disputes and the United Nations Commission on International Trade Law rules.

He is also on the list of arbitrators in the field of natural resources and environment maintained by the secretary general to the Permanent Court of Arbitration.

Alan Boyle, of Essex Court Chambers in London, is also an environmental arbitrator and a special arbitrator under Annex VIII of the 1982 Unclos.

The fifth lawyer, Oxman, is a professor and coeditor of the American Journal of International Law and a former US senior government official holding several posts. He also served as a judge ad hoc of the Itlos, the only American lawyer to have been appointed to such position, according to an article posted on the website of the University of Miami School of Law.

From 2003 to 2005, Oxman was a member of an arbitral tribunal in a dispute between Malaysia and Singapore.