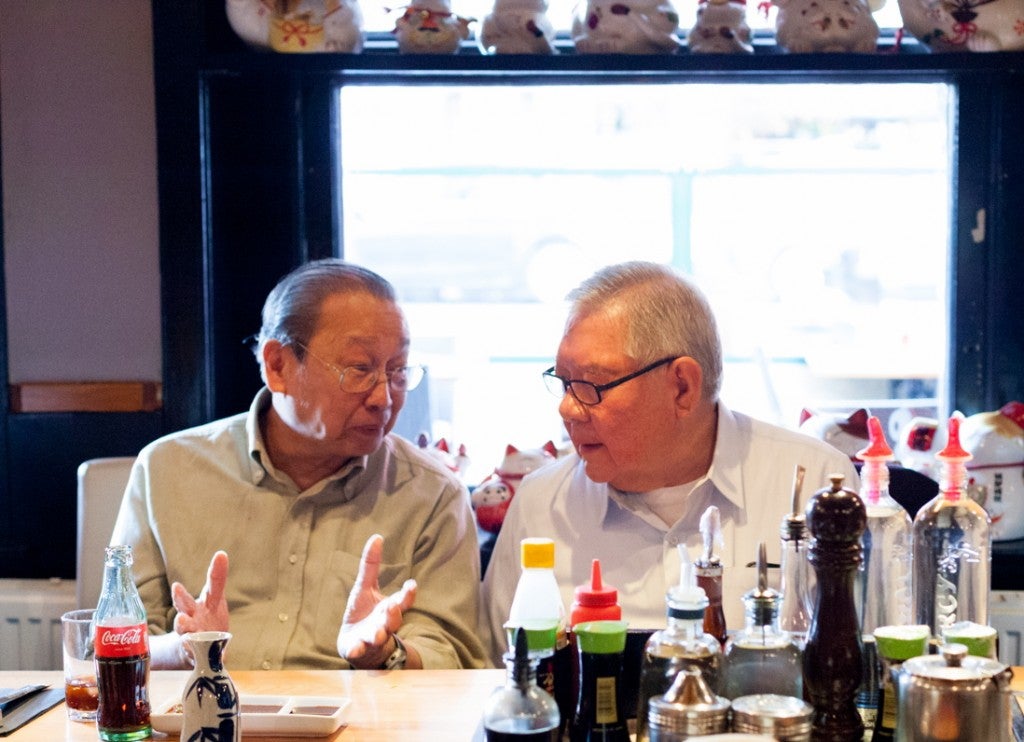 A dinner meeting between Speaker Feliciano Belmonte Jr. and Jose Maria Sison and Luis Jalandoni in Amsterdam on Thursday has revived hopes for the resumption of peace talks between the government and the communist leadership.

“It was a bridge-building and social meeting over dinner with Joma and Jalandoni,” Belmonte said.

Sison has declared his support for the government’s legal struggle against China’s “aggresive acts” in the South China Sea.

The meeting took place at a Japanese restaurant at 6 p.m. on Thursday.

Belmonte said that although he “certainly had no authority to negotiate anything,” the meeting was cause for optimism for the resumption of peace talks with the National Democratic Front (NDF), the political arm of the Communist Party of the Philippines (CPP).

Sison is the founder of the CPP and chief NDF political consultant while Jalandoni is the chair of the NDF peace panel negotiating with the government.

Both living in exile in the Netherlands, they remain important figures in the long-running communist insurgency in the Philippines.

“Yes, it’s in the direction of resumption” of peace talks, Belmonte said in a text message from the Netherlands, where he is observing the oral arguments in the arbitration case the Philippines had brought against China at a United Nations tribunal in The Hague.

“[It was a] mutual initiative. We were also curious about them,” Belmonte said when asked who set up the meeting.

NDF legal counsel Edre Olalia, who helped arrange the meeting from the Philippines, said in a telephone interview that Belmonte was no stranger to the NDF, as he was a “good friend” of Antonio Zumel, and a relative of NDF negotiator Fidel Agcaoili.

Olalia said that although he was not privy to the Amsterdam meeting, it at least augured well for the prospect of resuscitating the peace negotiations with the CPP-NDF.

“[Speaker Belmonte] has the moral authority and political capital to do this,” Olalia said.

Olalia noted that former Speaker Jose de Venecia, during his term, also played a role in confidence-building with the NDF, such as facilitating the release of political prisoners.

Peace negotiations with the communist leadership have been stalled since 2004, with both parties adamant in pushing for their respective conditions, such as the release of NDF consultants and a ceasefire agreement, before the start of formal talks.

But Olalia said the impasse was primarily due to the government’s refusal to comply with the terms of the Joint Agreement on Safety and Immunity Guarantees for the release of political prisoners.

Read Next
UN arbitral court sets 2nd round of hearings
EDITORS' PICK
Current dominant strain of COVID-19 more infectious than original—study
Water remains our saving grace right now
EuroMillions Superdraw: A lottery draw unlike any other is coming to the Philippines
DOLE: Return of OFWs’ remains from Saudi to be ‘delayed,’ deadline moved to ‘early next week’
Smart releases Hyun Bin’s second TVC
‘Justice will be done,’ Duterte assures as he vowed probe on Jolo incident to bare ‘truth’
MOST READ
Duterte tells military: No other president looked at you the way I did
Locsin warns of ‘severest response’ if China’s army drills in SCS ‘spill over’ to PH domain
Man who stole 2 cans of luncheon meat lands in jail in Manila
VP Leni Robredo: ‘Remember, you were made for these times’
Don't miss out on the latest news and information.