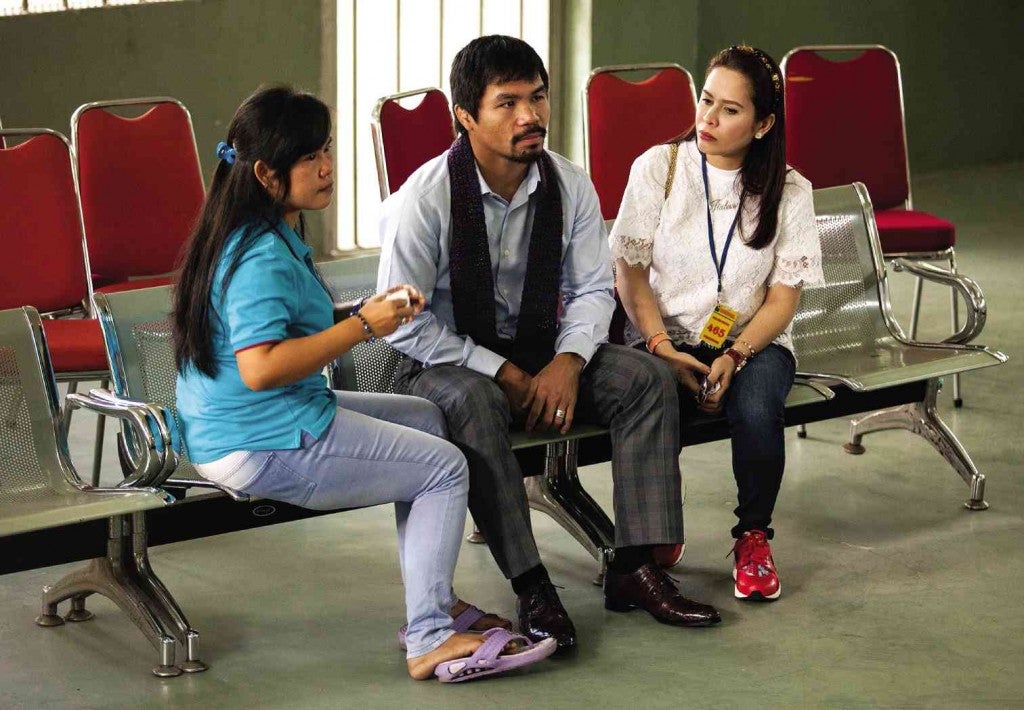 In a text message, Tomas Falgui II, Pacquiao’s legal counsel, described as “emotional” the meeting between Pacquiao and Veloso that lasted almost an hour.

Along with wife Jinkee, Pacquiao flew to Indonesia on Tuesday to shoot a commercial but fulfilled as well the promise he made to visit Veloso in her cell, when the single mother of two was scheduled to be executed with eight other foreigners for drug trafficking in April this year.

Veloso, who was spared from execution, was arrested at Yogyakarta airport in April 2010, with 2.6 kilos of heroin concealed in a luggage given to her by her recruiter.

Falgui said members of Pacquiao’s entourage were in tears during the meeting, except for the boxer-lawmaker.

But the boxer started crying when the group returned to their car, saying, “Grabe! Marami sa atin na nasa labas ng kulungan ang madaling mawalan ng pag-asa. Si Mary Jane nakakulong, subalit malalim ang pananampalataya at hindi nawawalan ng pag-asa (A lot of us are free and out of jail, yet we easily lose hope. Here’s Mary Jane, languishing in her cell, yet steadfastly holding on to her faith).

Falgui said the Pacquiaos arrived at Wirongunan Prison in Yogyakarta on Friday at 7:35 a.m., along with 18 others, including officials of the Philippine Embassy in Kuala Lumpur, Indonesian prosecutors and their staff, and officials of an Indonesian company producing a herbal medicine that the boxer was endorsing.

The Pacquiaos, both of whom are Christians, met with Veloso inside her cell and held hands in prayer, according to a photograph of the visit that Pacquiao had posted online.

A government official who witnessed the meeting said Veloso broke down in tears as she prayed and at one point tightly embraced the boxing star.

“Praying with Mary Jane Veloso. Please keep her in your prayers,” read the caption on the photo, cross-posted on Facebook and Instagram.

“We’re hoping for help to save Mary Jane’s life,” Pacquiao told reporters after his visit. “According to my information, she is innocent … and a victim of illegal recruitment,” added Pacquiao, who is also vice chair of a committee on Filipino overseas workers in the House of Representatives.

Pacquiao was later expected to meet Indonesian lawmakers in Jakarta to plead for clemency for Veloso.

After the visit, Veloso gave Pacquiao a purple scarf with his names “Manny” and “Pacman” sewn on it, which she had made in prison. The boxing champ wore it on his way out of the facility, Veloso’s lawyer, Edre Olalia said, quoting reports from his lawyer-counterpart and migrant groups in Indonesia.

Pacquiao gave Veloso $3,000 (around P120,000), reports said, but quoted prison officials as saying they would keep the money for the convict as it was against the rules for inmates to have cash.

The migrant support group, Jaringan Buruh Migran Indonesia, an affiliate of Migrante International, also gave the Pacquiaos a handmade batik, (batik tulis from Yogyakarta), to show their gratitude for the couple’s “continuing campaign to save Mary Jane.”

“The visit by a kababayan (compatriot) who is not only a world-renowned boxing champ but who also has a big heart for the underdog demonstrates that the likes of Manny fights for Mary,” Olalia said.

“It is a big morale booster for our client even as we are pleased that he is very popular in Indonesia,” said the lawyer, recounting how Pacquiao was mobbed by local media and spectators.

The “mayhem … with the press, spectators and police competing for space” made Pacquiao refrain from issuing a statement after the visit,” Olalia said.

Still on brink of death

It was the first high-profile visit that Veloso had received some two months after she was spared from a firing squad at the last minute while eight other drug convicts—two Australians, four Nigerians, a Brazilian and an Indonesian—were executed on April 29.

But Olalia said two judicial reviews have failed to overturn Veloso’s conviction and death sentence. He will discuss a possible third appeal with his Indonesian counterparts but believes that “an appeal for clemency may be stronger,” the Veloso family lawyer added.

There was no immediate word on whether Pacquiao had met with Indonesian President Joko “Jokowi” Widodo as he had planned, Olalia said.

While the Indonesian government has yet to set conditions for Veloso’s reprieve, Migrante International had expressed concern over her fate, citing reports that the clemency appeal of French drug convict Serge Atlaoui had been rejected, and that he might be executed “after the end of Ramadan.”

“Mary Jane remains on the brink of death for as long as the death sentence is not lifted,” the group said.

But Justice Secretary Leila de Lima yesterday allayed such fears, saying she has not received any worrisome feedback on Veloso’s case from Indonesia and that Jakarta would respect the country’s legal process.

“I am confident [that] it is really more of a comity, the mutual respect of the Philippines and Indonesia, that since they have already said they will respect our legal processes, I don’t think they will turn back from that,” De Lima told reporters.

“That would not look good … So I don’t think [another schedule for an execution is] possible,” the justice chief said.

Veloso’s mother, Celia, expressed relief at De Lima’s words: “I am very happy because, based on what I heard, it looks like we have a big chance that Mary Jane can come home,” added the older woman, who joined several supporters during the hourlong meeting with De Lima on Friday afternoon.

The older Veloso said the DOJ was set to officially inform its Indonesian counterpart, the Attorney General’s Office, and the Ministry of Law and Human Rights, about developments on her daughter’s case against her alleged recruiters, Maria Cristina Sergio and Julius Lacanilao.

The DOJ on Thursday recommended the filing of illegal recruitment, estafa and human trafficking charges against Sergio and Lacanilao, finding probable cause to put the two on trial.

De Lima said the resolution would show that Veloso was, in fact, a victim. Veloso had testified that she did not know about the drugs tucked inside the luggage that her recruiter, Sergio, handed her for her flight to Indonesia.

She belied Maria Cristina Sergio’s claims that the Department of Justice railroaded the case and that she and Julius Lacanilao were being used as scapegoats to save Veloso from the death penalty.

“That’s not true at all. The handling prosecutor knows that she needs to be careful, to be balanced, objective and impartial, and that we should always preserve the integrity of these proceedings,” De Lima said.

The plight of Filipino workers overseas is a sensitive issue in the country where about a tenth of some 100 million Filipinos leave for abroad in search of jobs and better opportunities.

Support group Migrante also thanked the Pacquiao couple for visiting Veloso, saying their visit “reflects the just and growing global demand that Mary Jane be granted clemency and be brought home to her family in the Philippines.” With reports from AFP and AP

Read Next
Filipino crewmen unpaid since April, in “dire’ straits
EDITORS' PICK
LTO’s P500-M deal for screws draws scrutiny
Smart reinforces superiority with best speed and mobile video experience in PH
Every Filipino home can now be a smart home with realme TechLife
Nestlé Philippines’ ‘NESCAFÉ Plan’ bags Grand Anvil at PRSP 56th Anvil Awards
New 3,045 COVID-19 cases push PH total active cases to 40,074
How to lose a PH genius: Wesley So officially a US citizen
MOST READ
Robredo on Sara Duterte leading poll surveys: Why are Filipinos drawn to leadership of this kind?
How to lose a Filipino genius: Wesley So officially a US citizen
Hugpong Ng Pagbabago fully supports Sara Duterte says confidant Davao del Norte governor
Duterte on his ‘faults’: ’I just have cases of extrajudicial killings’
Don't miss out on the latest news and information.