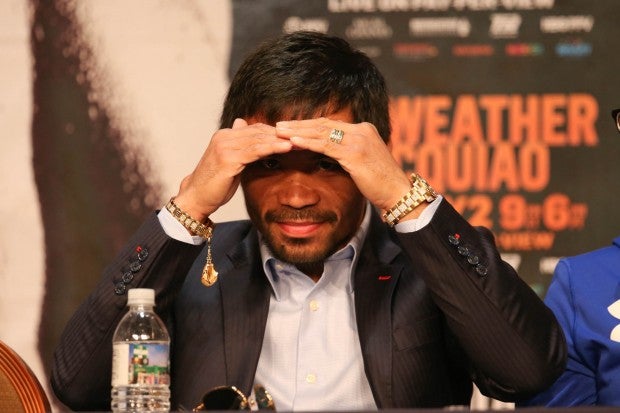 Veloso was sentenced to death in Indonesia after being arrested in 2009 with 2.6 kilograms of heroin sewn into the lining of her suitcase.

She was set to face the firing squad in April with several other foreign drug convicts but was granted an 11th hour reprieve after a woman suspected of recruiting her was arrested in the Philippines. The alleged recruiter and an accomplice now face charges in the Philippines.

After Veloso was given a reprieve, the Indonesian government stressed the decision was only a “postponement” to allow time for police investigations.

READ: DOJ reso on case filed by Veloso vs recruiters out in a week

The single mother of two young children has always maintained her innocence, claiming she was duped by an international human-trafficking gang into bringing the drugs into Indonesia.

Her case attracted huge attention in both Indonesia and the Philippines, with near daily rallies of support and celebrities including Pacquiao pleading for her life to be spared.

Pacquiao arrived in Indonesia on Tuesday.

“I will visit her on Friday,” he told reporters in the central Java city of Semarang, not far from the prison where Veloso is being held, adding he would see how he could help her.

“I’m going to meet the president on Friday, so we will see what we can do.”

Eight-weight world champion Pacquiao made global headlines in May when he was beaten by Floyd Mayweather in Las Vegas in what was dubbed “the fight of the century.” Local media reported Pacquiao was also filming a TV advert during his visit to Indonesia.

The Indonesian attorney general’s office could not be reached for comment on Wednesday.

Widodo has vowed there will be no clemency for drug traffickers on death row as Indonesia is facing an “emergency” due to rising narcotics use.

Seven other foreign drug convicts and one Indonesian were executed as planned on the prison island of Nusakambangan in late April, sparking an international outcry. AFP