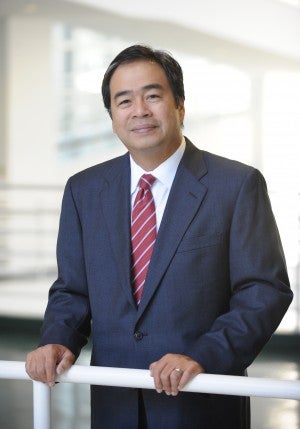 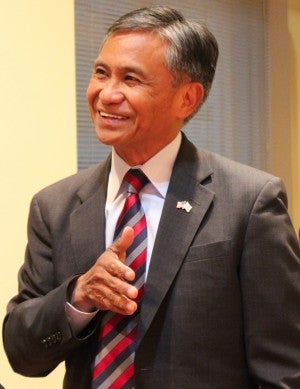 WASHINGTON, D.C. – A Filipino American university president and a retired U.S. Army major general are among 39 naturalized citizens named a “Great Immigrant” by Carnegie Corporation of New York as part of its July 4th tribute.

“Our founder, Andrew Carnegie, came to this country as the son of impoverished immigrants and grew up to become one of the greatest contributors to American industry and philanthropy,” said Vartan Gregorian, president of the Corporation. “His devotion to U.S. democracy stemmed from his conviction that the new infusion of talent that immigrants bring to our country keeps American society vibrant.”

The tribute to Esteban, Taguba and the other honorees is “simply a thank you” for their contributions which are “vital to the fabric of our nation and the strength of our democracy,” Gregorian points out in a statement issued July 1. “These individuals have helped advance and enlighten our society, culture, and economy.”

Every July 4 since 2006, Carnegie Corporation has recognized immigrants and their accomplishments through its “Great Immigrants: The Pride of America” initiative. This year, the tribute includes a full-page service ad in The New York Times and a companion website at greatimmigrants.org, which includes the stories of many other naturalized citizens, video and audio recordings, and interactive quizzes. 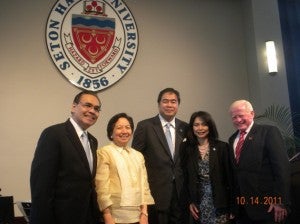 In a statement released by Seton Hall University, Esteban said: “The promise inherent in the America Dream, which has attracted immigrants to the United States for centuries, has been fulfilled in my life many times over. For that, I will be forever grateful to my adopted homeland. At Seton Hall, I work to ensure that today’s young Americans – many of whom come from immigrant families – receive an education that will allow them to realize their own hopes and aspirations.”

Esteban, Seton Hall University’s 20th President, was appointed in 2011 to head the private Roman Catholic university in New Jersey, the oldest and largest Catholic academic institution in the state.

An alumnus of the University of the Philippines, Esteban “distinguished himself as an academic leader and fiscal manager since joining Seton Hall in 2007 as its provost and then interim president,” said Patrick Murray, chairman of the Board of Regents.

During his inauguration, Philippine Ambassador Jose L. Cuisia Jr. described the event as “historic,” and “a big honor for the whole Filipino American community, especially given the fact that his investiture coincides with the celebration this October of the Filipino American History Month in the U.S.” Consul General Mario De Leon added that Esteban’s accomplishment as the first Filipino American to lead a major U.S. university “is a great inspiration to Filipino Americans.”

Taguba, who retired from the U.S. Army in 2007, was the second naturalized American to be promoted general officer rank in the Army. He gained world renown when he exposed U.S. military abuses of detainees held at Abu Ghraib prison in Iraq. It cost him his job when he accused the Bush administration of committing war crimes, prisoner abuse and torture in American military prisons.

Following his retirement, he committed himself to the cause of Filipino World War II veterans by helping regain their rightful benefits that were taken away from them by the 1946 Rescission Acts. Presently, he is leading a nationwide campaign to secure the Congressional Gold Medal Award for these veterans.

“For over 70 years, the Filipino World War II soldiers have sought recognition for their courageous actions and selfless service in defending the United States and the Philippines,” Taguba said at a recent press conference announcing the filing of the bill in Congress. “Despite having their benefits rescinded by the US Congress, they maintained their unwavering loyalty to the U.S.” 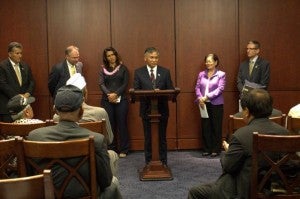 His pathway to U.S. citizenship, he says, began with his father, Sergeant First Class Tomas B. Taguba, who served as a Philippine Scout with the U.S. Armed Forces in the Far East (USAFFE). At the end of the war, the U.S Army offered his father an American citizenship “for his courageous and loyal service to the U.S. Armed Forces.” His mother, Maria Taguba, and three siblings immigrated to the U.S. in July 1961, landing in Hawaii to fulfill their dreams of becoming American citizens.

“The inspiration of my parents with their hard life suffering through the ravages of war back home, and their perseverance to seek a better life in America; to be loyal and grateful for the generosity of our new country that my father fought to defend opened an opportunity for me to serve my country as an American citizen,” Taguba said.

He added: “All told in our families, service to nation in answering the call to duty have amounted to over 230 years of military service. It all started with our immigrant roots who fought to defend the Philippines and United States, and guaranteed their mission, patriotism, and selfless service with their lives. My father and his fellow soldiers earned their citizenship. Today, we continue with our family tradition to serve this country and to demonstrate our patriotism and gratitude for generations to come.”

Taguba pointed out, “Thousands of immigrants have come to his country, and thousands of them have given their lives willingly since the early 1900’s, and thousands more wounded for life. This is what duty to country is expected of immigrants wanting to serve in the U.S. Armed Forces in return for an American citizenship. For immigrants like me, there is no other way but to earn it.”

In thanking the Carnegie Corporation, Taguba cites Andrew Carnegie’s own words: “There is no class so intensely patriotic…as the naturalized citizen and his child, for little does the native-born citizen know of the value of rights which have never been denied.”

Carnegie Corporation notes that nearly nine million legal permanent residents are currently eligible to naturalize and become U.S. citizens. The Corporation invites the public to visit its multimedia website greatimmigrants.org. and learn more about the inspiring lives of immigrants and the successes they have achieved in America.