PH’s gaya-gaya democracy? Not when it comes to gay marriage

Karen Amogawin grabbed me as I was taking pictures at the SF Pride parade last weekend. She was marching proudly with the employee group from UCSF Medical Center, where she is a manager in one of the labs. 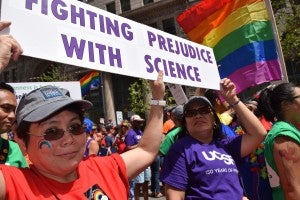 She just wanted to let an American Filipino reporter know just how joyous this occasion was.

When the U.S. Supreme Court decision was handed down on June 26, same-sex marriage was ruled a right protected by the 14th Amendment on liberty and equality grounds.

For the Filipina lesbian who came out of the closet when she left the Philippines, The Pride parade was practically an early Independence Day celebration for her and all LGBTQ members.

And while we marched, she paused to consider those she left back “home.” She said she was out of the closet as a lesbian in high school, and came to the U.S. at age 24. She lived the life of a lesbian here, but without that one unique right that is personal and establishes a family legacy, until the court made it legal in all 50 states.

“In our culture, it’s a long way still,” Amogawin told me.

Too bad, we’re not likely to see gaya-gaya on gay marriage. 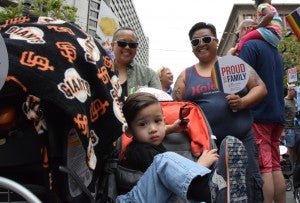 Even July 4th was thought to be “independent” enough to celebrate — until some real nationalists realized Filipino freedom tastes much more authentic on June 12.

Now we have the more politically correct sense of it.

The Fourth of July? It’s forever America’s day, but now somewhat demoted to Republic Day in the Philippines, (after all, something did happen. The U.S. recognized the Philippines as “on it’s own.”)

Sounds a lot better than a “We give up on you, Philippines” day. That doesn’t sound good for anybody.

Thank some speechwriter for coming up with “Filipino American Friendship Day.”

There are some instances, though, when the Philippines following the lead of U.S. democracy would be a good thing.

For example, gaya-gaya would make perfect sense when it comes to gay marriage.

But the Philippines is remaining true to its true colors.

It will tolerate LGBTQs in society to a point. But full equality as symbolized by marriage?

Yes, and on the shoulders on Imelda’s gowns are held up by real butterflies.

“We cannot always imitate what they do in America in terms of the law because they have different legal minds,” Senator Aquilino Pimentel III told reporters this week. “I think it’s impossible for us now.”

It’s still political death to be too loud a bakla backer, though there were reports of some “civil unions” taking place in Quezon City over the weekend.

I’m sure they looked longingly to the images of Filipinos in America during Pride.

While Amogawin may not be interested in marriage at this state in her life, she does have the option. And that’s some right.

Many younger sons and daughters of Filipino immigrants, are happily and eagerly opting for that right.

Tressa and Debbie Navalta Enriquez of Daly City, chose it for themselves.

And for their children, infant daughter Rivers, and their son, Dexter. 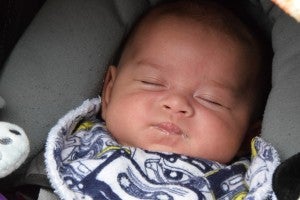 Rivers Navalta-Enriquez was asleep for most of the parade. Her parent’s wedding in 2008, was recognized as legal in all 50 states when the U.S. Supreme Court ruled last week.

And now their marriage is recognized in every state in America.

“Everyone is equal,” said Amogawin.

But even the UCSF manager knows that LGBTQ in America still have some rights issues.

Marriage was one narrow subset of liberties. There are still a majority of states that do not protect LBGTQ in housing and employment.

It’s an ongoing, evolutionary process, this thing called Democracy, even in the United States.

The gay marriage issue was a sign that a modern day civil rights era has begun.

In the U.S. now. In the Philippines, why not?

Of all the things that go gaya-gaya, this should be one.

Emil Guillermo is an award-winning journalist and commentator www.twitter.com/emilamok