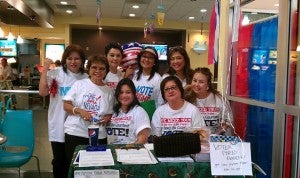 LAS VEGAS – New immigration data released by a Washington, D.C. think tank show the growing clout of immigrants, particularly Asians and Latinos, in Nevada where Filipino Americans are the largest Asian ethnic group with estimates ranging from 30,000 to 100,000.

The Immigration Policy Research Center, which provides non-partisan research and advice to policy-makers, the media and the public, said Asians and Latinos are gaining more political and economic power in the Silver State.

“Fewer states have Asians and Latinos showed growing political and economic muscle as is apparent in Nevada,” the think-tank said in a 2014 update of immigration analysis on census data.

Among the key findings:

While the English proficiency of Asian and Latino children continues to improve, the number of college graduates from the two communities are increasing, the Immigration Policy Center said.

Filipino Americans are the largest Asian ethnic group in Nevada and the premier city of Las Vegas, with estimates ranging from 30,000 to 100,000.

They are employed mostly as nurses, doctors, therapists and other healthcare professionals and as card dealers in casinos.

“Our goal has always been to increase our number of registered voters,” said Rozita Lee, a popular Filipino American community leader. “We can get the attention of Nevada’s political leaders when we have the numbers to show for.”

Read Next
NYC mayor taps Fil-Am as economic development chief
EDITORS' PICK
House energy committee chair Arroyo bats for cheap electricity
PNP vows to bring justice for slain Percy Lapid; says probe underway
Percy Lapid’s kin: ‘We demand that his cowardly assassins be brought to justice’
‘Seniority’ requirement despite vacant posts in DOH bothers senators
Nothing’s certain so here’s how everyday Filipinos can make the most out of their Plan B
Do all the things you do, faster
MOST READ
Student stabs teacher dead in Samar town
Trixie Angeles quits as press secretary due to health reasons
Not rehired?: Trixie Angeles not on list of reappointed Cabinet execs
Heart Evangelista to stay abroad ‘indefinitely’: ‘Hindi muna ako babalik’
Don't miss out on the latest news and information.