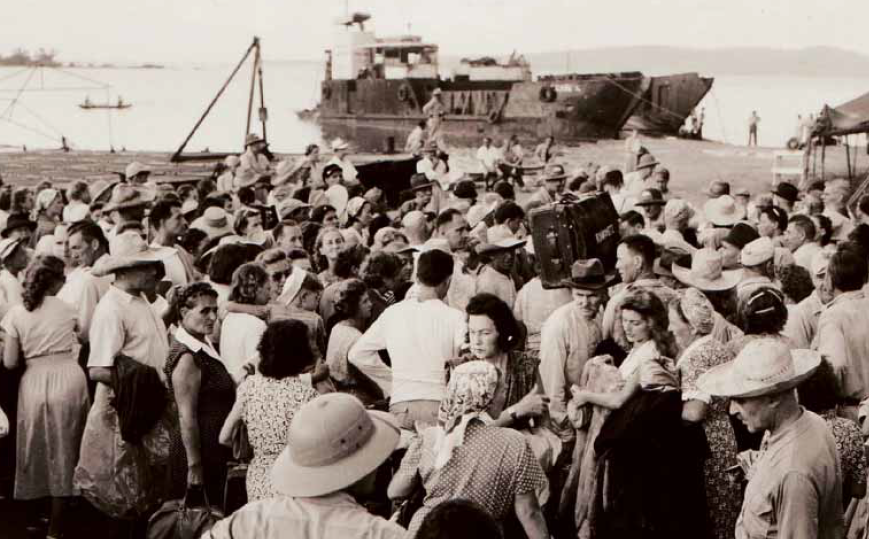 ‘GIVEME YOURHUDDLEDMASSES YEARNING TOBREATHE’ ‘White Russians’ disembark on Tubabao Island from their rusty ship after a journey that took them from Bolshevik Russia toMaoist China and finally to the Philippines, the only country willing to shelter them in 1948. CONTRIBUTED PHOTO

Old people in Guiuan, Eastern Samar, often speak about the time when there were “White Russians” on Tubabao Island off the town on Leyte Gulf.

Those days, they tell the children of Guiuan, were the Tiempo Ruso—the Time of the Russians.

But, according to Bernard Kerblat, country representative of the United Nations High Commissioner for Refugees (UNHCR), little did most people in Guiuan know that it was a story of “great compassion,” how the Filipinos, then led by President Elpidio Quirino, gave shelter to Russians fleeing persecution in their homeland.

Kerblat was speaking at a commemorative lecture organized by the UNHCR and the President Elpidio Quirino Foundation at the National Museum in Manila on Thursday, ahead of World Refugee Day on Friday.

Drawing students, teachers, and scholars, it was part of the Quirino Foundation’s lecture series to honor the Philippines’ sixth President and his administration during the yearlong celebration of his 125th birthday.

Kerblat said the Philippines was barely two years old as a new republic and still recovering from the ravages of World War II, but Quirino did not hesitate to take in 6,000 refugees from China who were called “White Russians.”

After the Russian Revolution that toppled the czarist regime, opponents of the communist Soviet Union fled to neighboring China and settled in Beijing, Tianjin, Harbin and Shanghai.

“They went to China to rebuild their lives but all of a sudden these people began to fear for their lives,” Kerblat said.

In 1947, when the victory of the Communist Party’s Red Army was becoming imminent in China, the White Russians feared persecution and the possibility that they would be forced to go back to the Union of Soviet Socialist Republics, where returning refugees were either sent to labor camps or killed.

The Russians and the other Europeans sought help from other countries through the International Refugee Organization, sending letters to countries, including the United States, pleading to be taken in.

Only PH took them in

“But the only country [that] raised its hand and said, ‘Come over,’ was the Philippines,” Kerblat said.

Aboard rusty ships, the refugees arrived on Tubabao Island and stayed there while waiting to be resettled in another country.

Kerblat noted that there were few sources of information about the settlement of the White Russians on Tubabao.

“I realized over my last five years in this country that very few people, including high-level decision-makers, were aware of it,” he said.

Kerblat said the 25-year-old daughter of former Guiuan Mayor Annaliza Gonzales Kwan, Kinna, took the time to do research about Tiempo Ruso, traveling to California and Sydney to interview the refugees and their descendants.

Kwan, in an interview after the lecture, said she started to look into that part of the town’s history while she was studying humanities at the University of Santo Tomas in Manila.

“We used to hear elders of Guiuan mentioning Tiempo Ruso. I always asked, ‘What was that?’ My mother was also telling me about her ballet teacher learning ballet from the Russians on Tubabao,” Kwan said.

Kwan said the literature about the Tubabao Refugee Camp was so scant that she had to look for other sources.

She said that in one of her interviews with former refugees, an old woman recounted to her how she was touched by President Quirino’s acts of mercy and kindness.

On Oct. 28, 1949, Quirino visited the refugee camp to check the Russians’ living conditions.

He noticed the barbed-wire fence around the camp and ordered it to be taken down, saying the refugees were not security threats.

Kwan said the old woman, who was there, felt the refugees were genuinely accepted regardless of their race and beliefs.

Seventy years later, the people of Guiuan and the Russians met again after Supertyphoon “Yolanda” (international name: Haiyan) flattened the town in November 2013.

This time, the people of Guiuan were the ones needing help and the Russians, on seeing the devastation on television, remembered the time when the Philippines volunteered to take them in. They stood up to lend a hand.

Kwan said the former refugees and their families passed the hat around to raise money and donations for the typhoon victims in Samar.

“It was touching and we were grateful,” Kwan said.

Ruby Quirino Gonzalez, granddaughter of President Quirino, said the foundation had been helping Kwan with her research and would possibly publish a book about the White Russians on Tubabao.

“We cannot appreciate and evaluate our past without knowing it,” Gonzalez said.

“[President Quirino] was a global citizen even before it became a fashion. He believed we could not be an isolated republic and merely an island nation,” she said.

Besides the White Russians, Kerblat spoke about eight other waves of refugees who were welcomed to the Philippines in the 1920s and 1930s.

Then followed 1,500 Jews from Europe who fled certain death at the hands of the Nazis in 1933.

“They decided to take matters into their hands and sailed to Genoa, Italy, and made couple of passages to come to Manila,” Kerblat said.

Some 200 Spaniards also sought asylum in the Philippines at the height of the Spanish Civil War in 1936.

In 1940, he said, President Manuel Quezon issued a decree allowing the refugees into the Philippines.

That was the Philippine Immigration Act, which allowed the country “for humanitarian reasons, and when not opposed to the public interest,” to admit foreigners seeking refuge from religious, political or racial persecution in their own countries.

The Philippine Immigration Act preceded the landmark international conventions relating to the status of refugees and the status of stateless people, adopted in 1951 and 1954, respectively.

Waves of refugees came to the Philippines after that, including thousands of Vietnamese boat people fleeing the communist regime in their country from the late 1970s to the 1980s.

The Philippines also built an asylum camp in Palawan for the Vietnamese boat people.

Kerblat said that from the history of the Philippines’ humanitarian deeds, it was no wonder that it was the first country to announce to the world in May that it would not turn away the Rohingya, Muslims fleeing persecution in Burma (Myanmar).

“The Philippines has a unique role in Southeast Asia, serving as a barometer for major international events,” Kerblat said.

Elpidio “EQ” Quirino: The President who forgave his loved ones’ killers

Filipino’s grandmama could be Russia’s Anastasia

Read Next
US ruling hailed in PH
EDITORS' PICK
Workers are exempted from ‘no vax, no ride’ policy – DOLE chief
Over 3 Million worth of prizes to be won at Smart Padala’s SENDali Manalo Promo!
PH to import 60,000 tons of fish to cover shortage
Gear up and get ready to play with Yamaha Mio Gear
#VotePH2022: COVID, power woes loom as poll concerns
Acer starts the year off strong with the Aspire Vero National Geographic Edition
MOST READ
Guevarra to Acosta: Obey rules on unvaccinated
Emma Stone calls Andrew Garfield a ‘jerk’ after he ‘lied’ about his ‘Spider-Man: No Way Home’ appearance
Cold-case investigation names surprise suspect in Anne Frank’s betrayal
Czech anti-vax singer dies after deliberate infection
Don't miss out on the latest news and information.