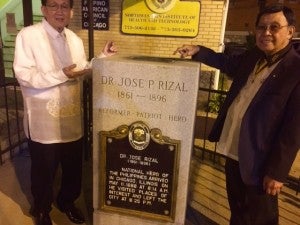 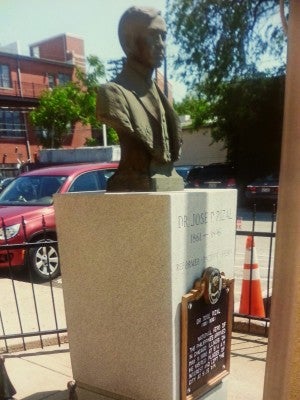 CHICAGO – The theft of Philippine National Hero Jose Rizal’s bust, at the entrance of the Jose Rizal Heritage Center headquarters of the Filipino American Council of Chicago (FACC), marred the center’ commemoration of the hero’s 154th birthday.

FACC president Dr. Rufino Crisostomo said that the center maintenance man reported the bust missing from its pedestal on June 16,the morning after an evening of revelries celebrating the Chicago Blackhawks winning hockey’s Stanley Cup over Tampa’s Lightning on June 15.

The Rizal Center is walking distance from Wrigley Field, one of the venues where thousands of sports fans gathered and celebrated into the early hours of the following day. Some tipsters informed Crisostomo that six intoxicated revelers yanked out Rizal’s bust and carted it away in a car.

Crisostomo said that a police report was made, and despite his appeal for the bust’s return, it remains missing. During the commemoration led by the Order of the Knights of Rizal, Crisostomo reiterated his call for help to replace the bust.

Consul General Generoso Calonge who was the event’s guest speaker and later was made honorary Knight Commander added a personal appeal for help in replacing the bust to show respect and honor to the National Hero.

Inscribed on the base of the pedestal of the missing bust is plaque stating that Dr. Jose Rizal made a brief visit in Chicago on May 11, 1888 during his Spring U.S. cross-country train ride from Oakland, California to New York City where he took a ship to England for his second stay in Europe.

A full-bodied statue of Rizal also stands about a mile northeast of the Rizal Center on a ground donated by the Chicago Park District.  The statue was unveiled in June 1999 with former President Fidel Ramos as guest of honor. The statue was given to the Filipino American community of Chicago as part of the Philippine Independence centennial celebration.

In the spring of 2002, after then-President George W. Bush announced his decision to send U.S. troops to Iraq, activists opposing the war stole one of the three flagpoles that were at the rear of the Rizal Statue.

The protesters hauled away the pole with the American flag while those with the Philippine and the Chicago flags were left untouched.