New places to get Filipino food in New York City 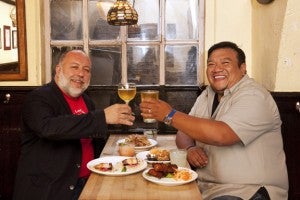 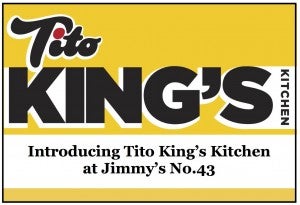 Tito King’s Kitchen at Jimmy’s No. 43 is a collaboration between bar owner Jimmy Carbone and Chef King Phojanakong. WEBSITE PHOTO

NEW YORK CITY — From new outposts and pop-ups to new kitchens and concepts, Filipino-inspired dishes and bar food are making their way into the plates of New Yorkers.

This spring alone, food-lovers from the city and across the rivers saw the opening of three rather unusual places to get Filipino food.

Tito King’s Kitchen at Jimmy’s No. 43 is the newest place in the city where one can get a Filipino food fix. It is a new, permanent restaurant collaboration of friends Jimmy Carbone and Chef King Phojanakong, and after a few days of taste-testing, they officially opened the kitchen on Monday, June 15. The new concept specializes in sophisticated yet approachable Filipino street food.

Jimmy and King met over a decade ago as volunteers at “Days of Tastes,” a program that teaches 1st and 2nd graders about food and flavor. The friendship developed and since then, the duo has worked together on various projects such as Pig Island, New York’s favorite porcine festival, and countless benefit events for Slow Food and other local charities.

Chef King told the Asian Journal, “Jimmy’s has been a big fan of my food, and in one of his visits, he said he wanted to have the food I served in his bar, and I’m a big fan of his bar.” Hence, the collaboration.

Jimmy’s No. 43 is a famous watering hole in the East Village and has been one of the city’s top craft beer destinations for years. Realizing I was Filipino, Jimmy exclaimed, “You’ll love it here. We have San Miguel and Red Horse!”

Now, those Filipino beers have found their match. Tito King’s Kitchen is open for business seven nights a week, churning out Filipino and Thai bar food, also known in the Philippines as “pulutan.”

There are also plans to serve lechon – a whole roast pig – which can be enjoyed in one of the two private dining rooms. Chef King will also serve an abbreviated bar menu on weekends after midnight, perfect of the night owls.

Jimmy and Chef King look forward to providing the neighborhood with exciting new culinary offerings – particularly in the wake of an East Village explosion that decimated the entire building next door to Jimmy’s and rocked the neighborhood to the core.

“I was here then, and I heard the explosion. It was about ten feet from our kitchen,” Jimmy told us.

The bar was closed for a couple of weeks while investigation was ongoing. They also had to fix the water damage brought about by the incident.

Now, the bar is back on its feet. There were no empty chairs when we visited one Monday evening. Jimmy’s No. 43 boasts a full liquor license and a great new selection of local whiskey, gin and bourbon cocktails, which pair beautifully with Chef King’s Filipino dishes.

Must haves if you ever visit? For me, it’s the vodka calamansi, which I found refreshing. But if you’re into cocktails with a kick, try the tequila paloma, which is jalapeno-infused; and if you’re into a little sweet, the lemongrass gin and tonic is for you.

And while craft beer and local cider will always be the bedrock of the concept, Jimmy and Chef King look forward to wowing regulars and new customers with the bar’s new food and cocktail program.

Lumpia Shack began selling its now famous lumpia at Smorgasburg, a giant all-food market that launched in May 2011 and happens Saturdays in Williamsburg and Sundays in Brooklyn Bridge Park.  Smorgasburg – a play on the words smorgasbord and Williamsburg – showcases the best of Brooklyn’s artisanal food scene, with 100 local and regional vendors in a beautiful waterfront setting. 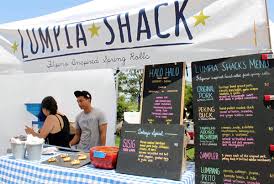 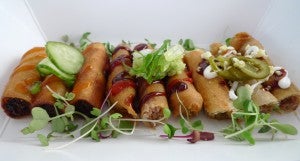 Neil and Angie Syham’s Lumpia Shack got started at all-food market in Brooklyn; they have branched out to the South Street Seaport. WEBSITE PHOTO

For its seasonal operation (from Memorial Day weekend to October) at the South Street Seaport, Smorgasburg brought eight of its food vendors, including Lumpia Shack.

For their Seaport debut, Chef Neil Syham decided to come up with something new – their signature sisig burger. Yes, you read that right.

Then there’s the usual Filipino-inspired BBQ bowls where diners can choose from a base (cold rice noodles, brown rice or mixed green salad) and BBQ skewers (organic chicken, Berkshire pork or organic tofu). The bowls are served with mixed green salad, pickled radish, sweet chili sauce and fried garlic. Heritage pork lumpia and mushroom lumpia can be ordered on the side.

Chef Neil and his wife, Angie, started Lumpia Shack in May 2012.

“I decided to open up Lumpia Shack because it was something that I always loved to eat as a kid and even as an adult. I was always making lumpia for family events, BBQs and potlucks, and especially during college for my friends and roommates,” Chef Neil told the Asian Journal in a previous interview.

After working in advertising for seven years, Neil decided to pursue his passion and went to culinary school. With the experience that he gained after a few years cooking at various restaurants, he decided to start Lumpia Shack, combining his culinary experiences with the food he grew up eating.

They have been working with Smorgasburg for more than three years now and they consider it a great experience.

“We were elated when we found out we got into the market and have been very happy with our experience there. From the beginning, we have had a steady stream of customers– some who know what lumpia is and are drawn to us for that reason, and others who have never tasted Filipino food before. We have a lot of tourists and visitors, but also a steady group of people who come back repeatedly and seek us out,” Neil shared.

And now that they’re also at South Street Seaport and their brick and mortar store on Greenwich Ave. in the West Village, there are more places where their now loyal fans can get their Filipino food fix; especially since chef Neil has gone beyond lumpia and introduced Filipino-inspired rice bowls. So there are more choices for the customers’ demanding palates.

In his line of business, chef Neil is always faced with challenges. Among the biggest ones wrestles with on a regular basis have something to do with getting creative in using ingredients to get the same bold flavors that Lumpia Shack has become famous for.

Then, there’s keeping costs low for customers, while using the best possible ingredients and supporting local businesses as much as possible.

“We are always striving to come up with new and exciting ways to incorporate these ingredients to produce amazing Filipino flavors,” chef Neil said. “We primarily shop at the Union Square Greenmarket and are proud to be supporting local farmers. We think that vegetables, eggs, and milk taste much better grown close by in small farms than when they are shipped from far away or produced in massive factories (and have a smaller environmental impact).”

“Sometimes people will look at the size of the spring rolls and perhaps feel that they’re not worth what we charge. But most often I think people appreciate, in addition to all the hard work that goes into cooking and especially hand-rolling the lumpia, that we use quality ingredients–the best available to NYC we think. Hopefully, that comes out in the food,” he added.

‘Bago’ in the East Village

For Carla Cinco, opening her new restaurant called Bago in the East Village is a homecoming of sorts.

For almost two decades starting in 1992, Carla and her siblings grew up helping their mom in their restaurant called Elvie’s, which was a meeting place for Filipinos craving home-cooked meals back then. 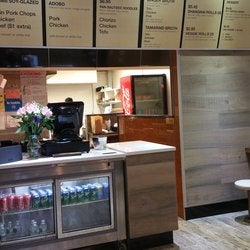 Carla Cinco’s Bago in the East Village got its inspiration from her mom’s cooking. WEBSITE PHOTO

Asked what inspired her to open Bago, Carla replied, “Watching my mother succeed in entertaining and giving pleasure to people most especially when it comes to food. My family comes from real estate but the females have always been strong cooks–great grandma, grandma and mama– so I’m not surprised of my love for food.”

Among her earliest food memories was that of watching her great grandmother cook with a “kalan,” a clay stove back in their hometown of Allen, Samar.

“I guess it comes natural to “want” to feed people in a way,” she quipped.

Through years of experience at Elvie’s, Carla said she knew which dishes were the most popular and mass friendly at the same time. She knows she couldn’t go wrong if she focused on the best-sellers aside from providing additional healthy choices as well.

The third among four siblings, Carla is thankful to have grown up while their family had Elvie’s.

“It was a great as I wouldn’t have the knowledge now about the demands when it comes to food for sure. We had challenges as a family but who’s perfect? I also learned from the mistakes and all the gains,” she remarked.

Asked if her mom is helping her out in this venture, Carla laughed.

“She is retired and bored.  She’s used to moving about. She’s always been that way. She is my chief advisor now. Who else better anyways?” she said. “I don’t want her to be committed as I just want her to relax now. She misses the resto business and her clients for so many years. That was a long term relationship so I don’t blame her.”