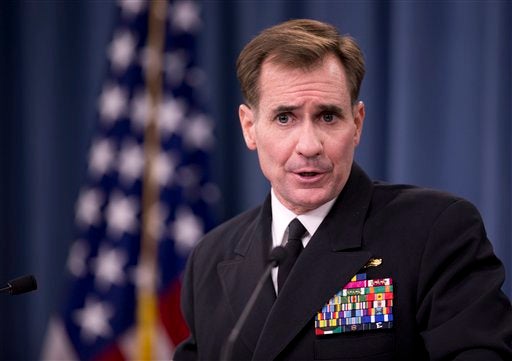 WASHINGTON–US and Chinese diplomats launched “candid” talks on maritime disputes and cyber hacking Monday as Washington pledged to pull no punches in seeking to resolve simmering problems between the two world powers.

About 400 Chinese officials have converged on Washington for the annual talks now in their seventh year being hosted by Vice President Joe Biden, Secretary of State John Kerry and Treasury Secretary Jacob Lew.

“While our countries disagree on many points, we recognize that there are many areas for mutually beneficial cooperation,” he told reporters, adding there was “no problem (that) can’t be better addressed with US-China cooperative efforts.”

The two-day Strategic and Economic Dialogue kicks off properly on Tuesday with Kerry and China’s State Councilor Yang Jiechi.

It will be Kerry’s first public appearance back at work since he broke his right leg in a cycling accident on May 31.

A senior State Department official said the security talks were the highest level exchanges between military and civilian leaders from both nations, as the world’s two leading economies seek to manage complicated ties.

Blinken hosted a welcome dinner on Sunday night, ahead of Monday’s three working groups on maritime and cyber issues as well as military-to-military relations.

There is also a group on nuclear and space cooperation, and a separate international affairs panel discussing everything from Iran to North Korea and Afghanistan.

Washington has called on Beijing to use its influence over Pyongyang to bring it back to six-party talks on curbing its nuclear ambitions.

The annual talks were important “because of the ability it gives us to break through stovepipes in the government and reach across agencies and deliver messages to people outside of our normal channels of communication,” said a senior State Department official.

So far, the discussions have been “candid and to the point” in dealing with the “most sensitive issues in the relationship.”

The world’s two leading economies remain at odds over China’s claims to much of the South China Sea and Washington has repeatedly urged Beijing to stop building artificial islands in the key waterway.

READ: US to China: Stop it now

But China said last month it will project its military power further beyond its borders at sea and more assertively in the air, defending the construction of the artificial islands.

READ: China: Reclamation to go on

Ties have also strained over US accusations of cyber espionage and they “have continuing differences on the area of human rights as well,” the US official said.

A bilateral cyber working group was suspended by Beijing last year after Washington indicted five Chinese military officers for hacking into US computers to pilfer intellectual property and US government secrets.

And this week’s talks come hot on the heels of the revelations of devastating breaches of US government computer networks, and US officials said they planned to address the issue directly at the talks.

The US administration has not openly accused Beijing of being behind the hacking of as many as 14 million employee records of the Office of Personnel Management, but the massive data breach is under investigation by the FBI.

Another State Department official acknowledged that not having a forum in which to discuss cyber issues “didn’t make it any easier” to resolve any disputes.

But both countries recognize the need for cooperation in the evolving and growing cyber world.

Kerry and Lew were set to host a dinner at Mount Vernon, the former of the first US president George Washington, for Yang and Vice Premier Wang Yang late Monday.